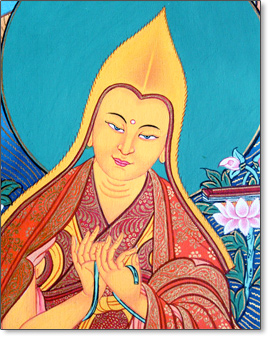 In the history of Buddhism, it is commonly said that the greatest writer, philosopher, and organizer is Tsong Khapa. Born in Tibet in 1357, he entered into an intensive training in all the open and secret teachings of Buddhism. Through the direct personal instruction of great Buddhas and Bodhisattvas, he led a religious and cultural revolution in Tibet, whose impact is still being measured by historians. He wrote 10,000 pages of commentaries on the Buddha's teachings, and established the foundation of the Dalai Lama tradition. One of his most impressive feats was the following poem, called Three Principal Paths, in which, in a mere fourteen stanzas, he synthesized the entire Buddhist teaching. It is said by some highly trained lamas that "if this work is studied with a pure heart and right effort, it can actually lead one to enlightenment."

It is worth noting that Samael Aun Weor mentioned Tsong Khapa on several occassions (such as The Revolution of Beelzebub in 1950), even though none of his works had yet been translated into Spanish or English (at that time, there were only a handful of Buddhist scriptures available in Spanish, and most of those were very basic, even incomplete or flawed). Nonetheless, as if in passing or as an incidental comment, Samael Aun Weor said that Tsong Khapa was an incarnation of the Buddha himself. This comment has caused some students of Buddhism to scoff and even criticize Samael, yet the exact same comment was made in the year 1921 by the highest Gelug lama in Tibet. Thus, we can have great confidence in this beautiful and intensely brilliant scripture.

I bow to all the high and holy lamas.

1
As far as I am able I will explain
The essence of all high teachings of the Victors,
The path that their holy sons commend,
The entry point for the fortunate seeking freedom.

2
Listen with a pure mind, fortunate ones
Who have no craving for the pleasures of life,
And who to make leisure and fortune meaningful strive
To turn their minds to the path which pleases the Victors.

3
Without pure renunciation, there is no way to end
This striving for pleasant results in the ocean of life.
It is because of their hankering life as well that beings
Are fettered, so seek renunciation first.

4
Leisure and fortune are hard to find, life is not long;
Think it constantly, stop desire for this life.
Think over and over how deeds and their fruits never fail,
And the cycle’s suffering: stop desire for the future.

5
When you have meditated thus and feel not even
A moment’s wish for the good things of cyclic life,
And when you begin to think both night and day
Of achieving freedom, you have found renunciation.

7
Those swept along four fierce river currents,
Chained up tight in past deeds, hard to undo,
Stuffed in a steel cage of grasping “self,”
Smothered in the patch-black ignorance.

8
In a limitless round they are born, and in their births
Are tortured by the three sufferings without a break;
Think how your mothers feel, think of what is happening
To them; try to develop this highest wish [bodhichitta].

9
You may master renunciation and the wish [bodhichitta],
But unless you have the wisdom perceiving reality
You cannot cut the root of cyclic life.
Make efforts in ways then to perceive interdependence.

10
A person has entered the path that pleases the Buddhas
When for all objects, in the cycle or beyond,
He sees that cause and effect can never fail,
And when for him they lose all solid appearance.

11
You have yet to realize the thought of the Able
As long as two ideas seem to you disparate;
The appearance of things - infallible interdependence
And emptiness - beyond taking any position.

12
At some point they no longer alternate, come together;
Just seeing that interdependence never fails
Brings realization that destroys how you hold to objects,
And then your analysis with view is complete.

13
In addition, the appearance prevents the existence extreme;
Emptiness that of non-existence, and if
You see how emptiness shows in cause and effect
You will never be stolen off by extreme views.

14
When you have grasped as well as I the essential points
Of each of the three principal paths explained,
Then go into isolation, my son, make mighty
Efforts, and quickly win your ultimate wish.

These instructions were imparted to Ngawang Drakpa, a friar from the Tsako district, by that very learned Buddhist monk, the glorious Lobsang Drakpa (Tsong Khapa, 1357-1419).

A Gnostic Instructor made comments to this scripture in this audio lecture:  Meditation without Exertion (2).