This famous story about the Tibetan Saint and Master Milarepa describes his encounter with five well-known Dakini. Dakini are difficult to describe with precision, as they have special properties or attributes that the intellect fails to grasp. To say that Dakini are goddesses falls short of their unique character; to say they are mere nature spirits (elementals) fails to illustrate their great intelligence and wisdom. In Tibetan Buddhism, dakini are generally depicted as fiercely intelligent female divinities who have been known to teach Dharma to initiates, but also come to initiates to learn Dharma. Dakini are often cited as protectors of Dharma, and many well-known scriptures and teachings were given to initiates by the Dakini.

The five in this story are said to be sisters (which may be symbolic of the five aspects of the Divine Mother). They also appear in the life story of Padmasambhava, who by teaching them Dharma tames them from being somewhat wild spirits or the elemental intelligences of nearby mountains, and they become protectors of the Dharma.

The events and characters of this story - like every great story of hidden wisdom - are symbolic. It is incorrect to take the story literally; to retreive the actual meaning requires meditation and conscious experience of the practice being taught here. 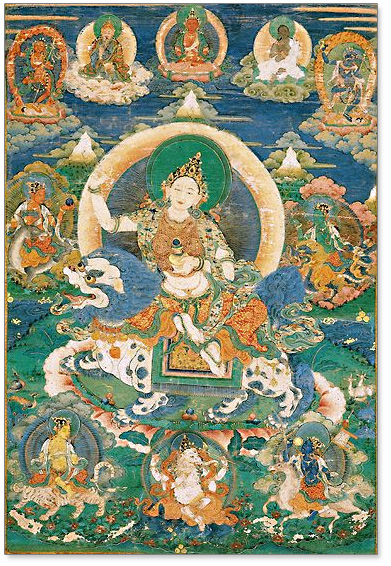 Tseringma and the Practice of Mudra

Late on the night of the eighth day of the Month of the Fire Rooster, a great light shone upon Milarepa's quiet hermitage in Chu Bar. Milarepa then sensed a fragrant odor he had never smelled before and heard the sound of approaching voices. While he was wondering about them, the Auspicious Lady of Long Life [Tseringma], well-dressed and wearing beautiful ornaments, appeared with her sisters —one bringing various kinds of incense; one, many delicious foods and drinks; one, musical instruments; another, fine and pretty clothes; and still another, beautiful flowers. They all bowed down before the Jetsun [an honorific title], circumambulated him many times, and offered him desirable oblations conjured by their miraculous powers. Then they sang in chorus: 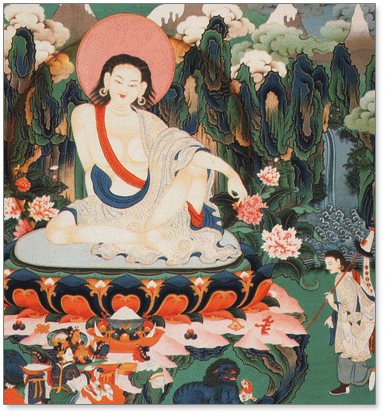 Is "Laughing Vajra" [see below] the name that Buddhas and Gurus call you?

Did not your parents name you "Toubagha,"

While people call you "The Great Accomplished Repa"?

Are you not the one with three wondrous names?

Vajra: (Sanskrit, "thunderbolt, lightning, diamond, adamantine") In Hinduism, the vajra is the weapon of Indra (compare to Zeus of the Greeks). In Tibetan Buddhism, the vajra (In Tibetan, dorje) is a symbol of true reality, the Emptiness, the Absolute, that which is indestructible. Esoterically, it is a symbol of the masculine phallus.

Thou-ba-gha: Tibetan for “Delightful to hear.”

Stands your hut by the bank of Lodahan River.

The King of the Nagas [“serpent people”] sounded

And into a wish-fulfilling Palace

Was this hut transformed.

On this river-bank in Medicine Valley,

You, a wondrous yogi,

From Samsaric temples you are freed [he is not subject to illusory religions].

Through our wondrous powers

We five girls have come

To praise and sing for you

With sweet words and tuneful voices.

We represent the four known types of womanhood

Called Lotus, Conch, Mark, and the Elephant [named thus by the shape of the yoni or feminine sexual organ; these names have levels of meanings].

Pray, practice Karma Mudra with us.

Karmamudra: (Sanskrit: literally, “action seal.” Tibetan: las ryga) In Tantra Yoga, a “mudra” is a female consort or sexual partner. Karma simply means “action.” Karmamudra is the tantric method of sexual transmutation accomplished through the sexual union of man and woman while restraining desire and the orgasm. The restrained creative energy is transformed into bodhichitta: the energy of the awakening wisdom mind.

Will you grant our prayer?

Do you know well

The four techniques of Karma Mudra

If so, you may apply them now,

For your servants are prepared.

It is said in the Supreme Tantra,

[That the qualified yogi] should attract the maids of Heaven,

Of Nagas, of Asuras, or of human kind.

It also says that of all services

The best is Karma Mudra.

Thus we come here this evening.

Whose naked body is full of splendor and radiance.

At this late hour

I hear your tuneful voices raised,

And your thoughts expressed in song.

[From whence come you, fair ladies?]

Does not your abode

Stand on the shining summit,

Towers not a palace

Under the canopy of clouds

‘Midst the flower-galaxy of stars?

Long are your lives and great your powers —

This of your mercy is the reward.

Your fortune rivals that of the God of Wealth —

This of your bounty is the reward.

Your servants are faithful and obedient —

This of your patience is the reward.

You are full of aspiration —

The fact that you have met me in this life

Proves your good wishes in past lives.

I sing this song for you

To reveal the deep relationship.

I am a follower of Naropa's Lineage,

Who has mastered Prana [life force or energy] and Bindu [“drop” or “dot”: masculine sexual energy].

'Tis true that of all offerings

A qualified Mudra is the best.

Most wondrous indeed are the four perfected Mudras.

The Mark [-shaped yoni] in the deep recess prevents all waste [of energy];

While through the "Elephant" Reality [Shunyata, the Absolute] is realized.

You are the auspicious, noble, and fault-free Lady of Long Life.

In your secret Wisdom Lotus [yoni]

And, when combined with "Pad," [a mantric sound representing the conciliating force that joins and harmonizes the male and female]

When Wisdom and Method [Father and Mother, male and female] together join The Bliss of Two-in-One is offered best.

The Four Blisses and Four Moments are

The essence of the Four Bodies of Buddha.

In Tibetan medicine, sexual energy is considered to originate at the top of the spinal column.

Then hold it in the Central Channel [an energy channel within the spine],

Reverse it [to the head].

Later when you spread it [through the nervous system],

Use the Liberating Mudra [of meditation] .

'Le" the Bliss of Equality;

"Kyi" [Tibetan: “of”] the intercourse 'twixt Bliss and Voidness [Reality];

"Phyag" is this and that to hold;

And "rGya," [Phyag rGya: Tibetan for mudra] to embrace Nirvana and Samsara.

This section is a poetic play on words revealing deeper meanings of the components to the Tibetan phrase “las kyi phyag rGya,” which means “karmamudra.” Milarepa does this again here:

"Las" is to contact this and act on that,

"Kyi" to do this and that for the associate;

"Phyag" is the Union of the Bliss and Void;

While "rGya" is not to go beyond [restrain the orgasm] .

This is the speed-path of Union,

A path to consummate the accomplishment

Directing one to the perfect Samhhogakaya [second Buddha body or state of attainment],

And leading to the Manifesting-Void of the Nirmanakayas [third Buddha body or state of attainment].

This is a path of bliss — of voidness, of no thoughts, and of two-in-one,

A path of quick assistance by a goddess.

You, fair ladies, will reach Liberation,

And, in the Realm of No-arising [the Absolute] will remain.

The Karma Mudra was then performed, during which the five goddesses offered Milarepa their bodies, words, and minds — also many foods and drinks to please him.

This is the story of how the Repa, "Laughing Vajra," the great Yogi who was capable of attracting and using goddesses for his Mudra practice, met with the Lady of Long Life; and in which the songs of inquiry and the answers, named "The Rosary of Bliss-Void Wisdom," are found.

After sincere prayers and offerings to the Deities, the two brother yogis -the compilers of this story -received a delightful revelation of permission, upon which the story was written.

The story of the Lady of Long Life and Milarepa, including several preachings of Mila and the requests of the five Dakinis, was compiled and preserved by Ahtsarya Bodhi Radsa and Repa Shiwa Aui.

This is the end of this wondrous account, composed of three successive stories.

Quoted from "The Hundred Thousand Songs of Milarepa" as translated by Garma C.C. Chang, Shambhala Publications, 1962.
Share This Page: