Homage to the Supreme Lord Candamaharosana!

Then the Supreme Lord spoke, paying homage to his Supreme lady
with five mandalas, asking her:

'My darling, my joy,
How shall the yogi know your form?
How should he show his respect, my Supreme Lady,
And how should he honour you?'

And the Supreme Lady [the Divine Mother] replied:

'All female forms in the sky and above and below the earth,
All high or low births, are my forms.
All invisible female beings are my forms:
All goddesses and demi-goddesses,
All titanesses and demonesses,
All serpent beings, nature goddesses and ghost maidens,
All lotus eaters and female devils,
And all human girls too,
All female animals and hungry ghosts,
All priestesses and high born ladies,
All trading women and working women,
All those born as writers and queens,
Teachers and scholars,
Tax collectors and gardeners,
Prostitutes and dyers,
Potters and huntresses,
Outcastes, musicians and toilet cleaners,
Washerwomen, barmaids and sweet-makers,
Blacksmiths' women, courtesans and dancers,
Bronzesmiths' and goldsmiths' women,
Fisherwomen and butchers' women,
Butter churners and flower-women,
Ascetics and conch-shell artisans,
Cane-splitters and poetesses,
Cow-herds and arrow-makers,
Stone-masons' women,
Wood gathers and jewellers:
I come in the form of women of all classes and trades,
And I am mother, sister and wife,
Aunt and niece,
Great-aunt and mother-in-law,
And every other kind of female relation.
And I am every tantric practitioner and yogini,
And widow and ascetic.
I take the forms of all these women
Who now live to serve all sentient beings.

'Confident each in her own mode,
Whichever form the yogi encounters
He should kiss and embrace her,
And uniting lotus and vajra in consummation
He serves and honours her.
With an altruistic desire to aid all sentient beings,
Serving women through love, the yogin gains power.
Power is bestowed instantaneously -
For that reason the yogin should serve women.
Woman is heaven and woman is truth,
Woman is the highest ascetic path,
The Buddha is woman and women are the community,
And woman is perfect wisdom. 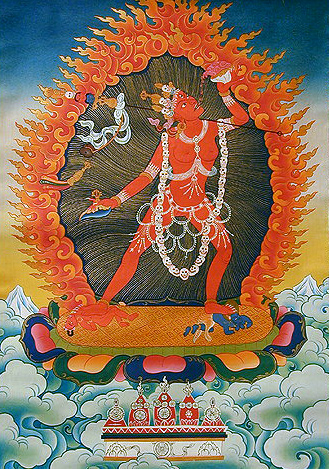 'Vajrayogini should be worshipped with offerings,
With wine, food and flowers and everything pleasurable,
And the yogin should array her with fine clothes,
Paying her respect with clear speech
And pressing his palms together courteously.
Regarding her and fondling her with attention
He should engage her in clear conversation,
And constantly kissing her and caressing her,
He should worship Vajrayogini.
Physically worshipped by those who are able
And verbally and mentally by those who are not,
To those who satisfy me through worship
I will grant all my powers.

'I am nowhere if not in the bodies of all women.
So rejecting all other paths, worship women!
This is the supreme act of worship of me,
And serving me in this way
The aspirant gains satisfaction and supreme power.
When he enters the path of insight
He is given perfectly discriminating vision of me,
Constantly, everywhere.
Meditating upon all forms without exception as myself,
He should make love to his own woman,
Visualising her as my embodiment,
And uniting lotus and vajra [sexual organs] in consummation
I will give him enlightenment.
Accordingly, devoted to me in all my forms,
That yogin is supreme in every way.
And through this method, in complete consummation,
The practitioner attains total devotion.

'He should not live in fear of sin,
In fear of the lower realms like hell.
Insofar as he fears samsara's stings,
To that extent he becomes impotent.
Although sin has not the slightest existence,
And virtue and merit do not exist at all,
Sin and merit were contrived
To protect the mind from life's pain.
Mind is the measure of all things
And all things last only for the duration of the thought.

'Who will go to heaven and who to hell?
Insofar as beings die with a poisoned imagination
Those who are free of the power of poison go to heaven
And those who faint away under the power of poison go to hell.
Thus ignorant people go to heaven or hell,
While the wise, totally comprehending,
Attain nirvana.
But if nirvana is taken as mere emptiness,
Like a lamp after a gust of wind,
This nihilism, like the paths of reward and retribution,
Brings enlightenment no closer.
Abandoning all such preoccupations, then,
The aspirant should devote himself to me,
And undoubtedly he will be granted power and awareness,
The powers of Candamaharosana, instantaneously.'