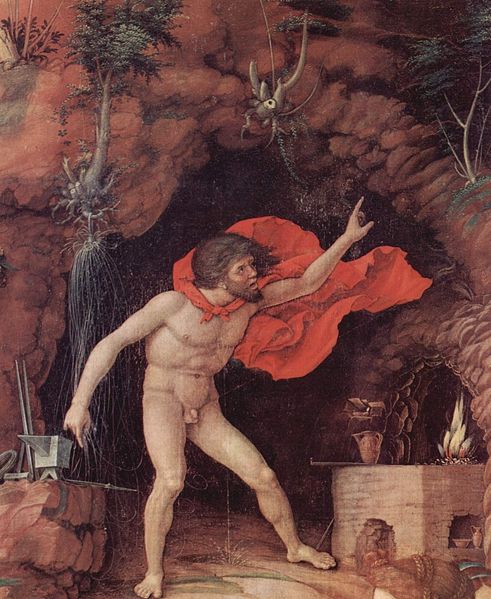 The Latin or Roman name for the Greek god Ἡφαιστος Hephaestus, known by the Egyptians as Ptah. A god of fire with a deep and ancient mythology, commonly remembered as the blacksmith who forges weapons for gods and heroes. Vulcan is very important in the tradition of Alchemy. In Hinduism, he is symbolized by Tvastri, later called Visvakarma.

"All of the processes related with sexual transmutation are possible because of the intervention of the Vital Body. This is the Archaeous that elaborates the blood and the semen in the human organism. This is Vulcan that transmutes the seminal liquor into Christic Energy. The Vital Body is the vehicle of the Soul -Consciousness in the human being. The consciousness is the flame and the vital body is the wick. Vulcan exists within the Microcosmos and within the Macrocosmos, in the human being and in Nature. The great Vulcan of Nature is Eden, the Ethereal Plane." —Samael Aun Weor, Alchemy and Kabbalah in the Tarot

"The office of Vulcan is the separation of the good from the bad. So the Art of Vulcan, which is Alchemy, is like unto death, by which the eternal and the temporal are divided one from another. So also this art might be called the death of things." - De Morbis Metallicis, Lib. I., Tract III., c. 1.

"Vulcan is an astral and not a corporal fabricator." - De Caduco Matricis, Par. VI.

"The artist working in metals and other minerals transforms them into other colours, and in so doing his operation is like that of the heaven itself. For as the artist excocts by means of Vulcan, or the igneous element, so heaven performs the work of coction through the Sun. The Sun, therefore, is the Vulcan of heaven accomplishing coction in the earth." - De Icteritiis.

"Vulcan is the fabricator and architect of all things, nor is his habitation in heaven only, that is, in the firmament, but equally in all the other elements." - Lib. Meteorum, c. 4.

"Where the three prime principles are wanting, there also the igneous essence is absent. The Igneous Vulcan is nothing else but sulfur, Sal Nitrum, and Mercury." - Ibid., c.5.