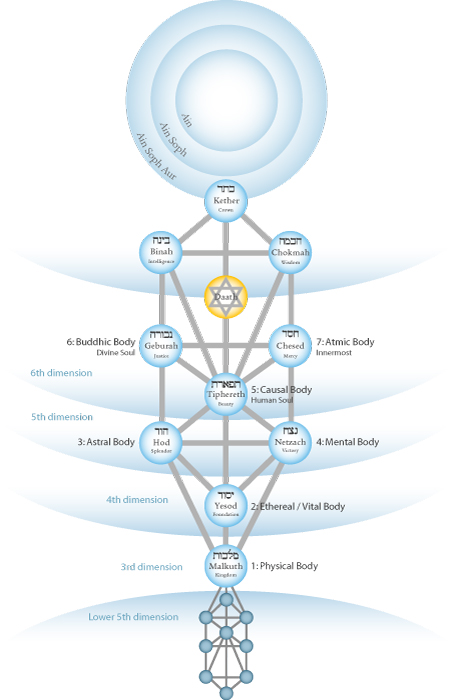 (or sefira; Hebrew) plural: Sephiroth. The "Sefirot" (סְפִירוֹת), singular "Sefirah" (סְפִירָה), from ספר ("to count") literally means "counting" or "enumeration", yet given the flexibility of Hebrew has other roots, such as sefer (text), sippur (recounting a story), sappir (sapphire, brilliance, luminary), separ (boundary), and safra (scribe).

A Sephirah is a symbol used in Kabbalah to represent levels of manifestation ranging from the very subtle to the very dense, and which apply to everything that exists, from the grandest scale to the most minute. Generally, these levels are represented in a structure of ten sephiroth called "the Tree of Life." This ten-sphered structure is a simplified arrangement of more complex renderings.

1. An emanation of Deity.

"The ten Sephiroth of universal vibration emerge from the Ain Soph, which is the microcosmic star that guides our interior. This star is the real Being of our Being. Ten Sephiroth are spoken of, but in reality there are twelve; the Ain Soph is the eleventh, and its tenebrous antithesis is in the abyss, which is the twelfth Sephirah. These are twelve spheres or universal regions that interpenetrate each other without confusion." - Samael Aun Weor, Tarot and Kabbalah

4. Chesed: Atman, the Innermost, our Divine Being

"The Sephiroth are atomic. The ten Sephiroth can be reduced into three tables:

1. A quantum table of the radiant energy that comes from the sun

2. An atomic weight table of the elements of nature

3. A molecular weight table of compounds.

"This is Jacob’s ladder, which goes from Earth to heaven. All of the worlds of cosmic consciousness are reduced to the three tables." - Samael Aun Weor, Tarot and Kabbalah

"A Sephirah cannot be understood only in one plane, because it is of a quadruple nature. Therefore, the Kabbalists clearly express the fact that there are Four Worlds." - Samael Aun Weor, Tarot and Kabbalah

2. A name of the Divine Mother.

"The ten known Sephiroth come from Sephirah, the Divine Mother, who resides in the heart temple. The mantra of the Divine Mother is IO which is the 10 emanations of Prakriti, in other words, the 10 (ten) Sephiroth." - Samael Aun Weor, Tarot and Kabbalah

See also: What are Sephiroth?