(Greek Πυθων) A symbolic serpent in Greek myth, also called Δρακαινα Δελφυνη Drakaina Delphynê, "serpent womb." The surviving myths of Python are only scraps. Some say Python protected the oracle at Delphi (which is why the oralces were called pythonesses). Delphi was a temple of the solar god Apollo. Sometimes Python is considered female, and other times male. Regardless, it is consistently said that Python degenerated and became dangerous, and was thus slain by Apollo. 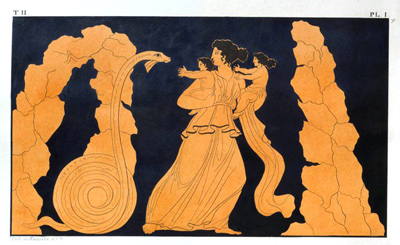 "When Tellus (the Earth) [Gaia] deep-coated with the slime of the late deluge, glowed again beneath the warm caresses of the shining sun, she brought forth countless species, some restored in ancient forms, some fashioned weird and new. Indeed Tellus (the Earth), against her will, produced a Serpent (Serpens) never known before, the huge Python, a terror to men's new-made tribes, so far it sprawled across the mountainside. The Archer god (Deus Arctitenens) [Apollon], whose shafts till then were used only against wild goats and fleeing deer, destroyed the monster with a thousand arrows, his quiver almost emptied, and the wounds, black wounds, poured forth their poison. Then to ensure the centuries should have no power to dull the lustre of that deed, Phoebus [Apollon] founded the sacred games, the crowded contests, known as Pythian from that Serpens overthrown." —Ovid, Metamorphoses

"The slime with which the earth was covered by the waters of the flood produced an excessive fertility, which called forth every variety of production, both bad and good. Among the rest, Python, an enormous serpent, crept forth, the terror of the people, and lurked in the caves of Mount Parnassus. Apollo slew him with his arrows- weapons which he had not before used against any but feeble animals, hares, wild goats, and such game. In commemoration of this illustrious conquest he instituted the Pythian games, in which the victor in feats of strength, swiftness of foot, or in the chariot race was crowned with a wreath of beech leaves; for the laurel was not yet adopted by Apollo as his own tree." —The Age of Fable, by Thomas Bulfinch [1855]

"The abominable Kundabuffer organ is the sexual fire directed from the coccygeal bone downwards, towards the atomic infernos of the human being. The abominable Kundabuffer organ is the tail of Satan, the tempting serpent of Eden, the horrible Python serpent that slithered in the mud of the earth and that the irritated Apollo hurt with his darts. The tempting serpent is the antithesis of the serpent of brass, which is entwined in the generator lingam." —Samael Aun Weor