(Hebrew מטטרון or מיטטרון) A very high angel who gave the twenty-two letters of the Hebrew alphabet and the Tarot to Moses. The Zohar explains that he is often referred to as "the watchman" or "the youth."

"Metatron was the prophet Enoch, about whom the Bible speaks. Enoch left us the twenty-two letters of the Hebrew alphabet. Enoch left us the Tarot in which is contained all of the divine wisdom." - Samael Aun Weor, The Manual of Practical Magic

4.1 I asked Metatron and said to him: “Why art thou called by the name of thy Creator, by seventy [two] names? Thou art greater than all the princes, higher than all the angels, beloved more than all the servants, honoured above all the mighty ones in kingship, greatness and glory: why do they call thee ' Youth [נער Na’ar]' in the high heavens ?"

Rabbi Ishmael said : Metatron, the angel, the Prince of the Presence, the Glory of all heavens, said to me:

15.1 As soon as the Holy One, blessed be He, took me in (His) service to attend the Throne of Glory and the Wheels (Galgallim) of the Merkaba and the needs of Shekinah, forthwith my flesh was changed into flames, my sinews into flaming fire, my bones into coals of burning juniper, the light of my eyelids into splendour of lightnings, my eye-balls into fire-brands, the hair of my head into dot flames, all my limbs into wings of burning fire and the whole of my body into glowing fire.

15.2 And on my right were divisions 6 of fiery flames, on my left fire-brands were burning, round about me storm wind and tempest were blowing and in front of me and behind me was roaring of thunder with earthquake.

FRAGMENT OF ‘ASCENSION OF MOSES’

15.1 Rabbi Ishmael said: Said to me Metatron, the Prince of the Presence and the prince over all the princes and he stands before Him who is greater than all the Elohim. And he goes in under the Throne of Glory. And he has a great tabernacle of light on high. And he brings forth the fire of deafness and puts (it) into the ears of the Holy Chayyoth, that they may not hear the voice of the Word (Dibbur) that goes forth from the mouth of the Divine Majesty.

15.2 And when Moses ascended on high, he fasted 121 fasts, till the habitations of the chashmal were opened to him; and he saw the heart within the heart of the Lion and he saw the innumerable companies of the hosts Around about him. And they desired to burn him. But Moses prayed for mercy, first for Israel and after that for himself: and He who sitteth on the Merkaba opened the windows that are above the heads of the Kerubim. And a host of 1800 advocates and the Prince of the Presence, Metatron, with them went forth to meet Moses. And they took the prayers of Israel and put them as a crown on the head of the Holy One, blessed be He.

15.3 And they said (Deut. 6: 4): "Hear, O Israel; the Lord our God is one Lord" and their face shone and rejoiced over Shekinah and they said to Metatron: "What are these? And to whom do they give all this honour and glory?"

And they answered: "To the Glorious Lord of Israel". And they spake: "Hear, O Israel: the Lord, our God, is one Lord. To whom shall be given abundance of honour and majesty but to Thee יהוה, the Divine Majesty, the King, living and eternal".

15.4 In that moment spake Akatriel Yah Yehod Sebaoth and said to Metatron, the Prince of the Presence: "Let no prayer that he prayeth before me return (to him) void. Hear thou his prayer and fulfil his desire whether (it be) great or small". 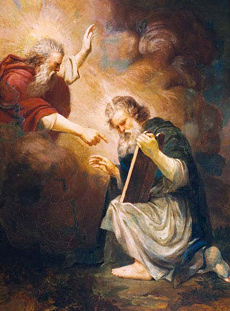 15.5 Forthwith Metatron, the Prince of the Presence, said to Moses: "Son of Amram! Fear not, for now God delights in thee. And ask thou thy desire of the Glory and Majesty. For thy face shines from one end of the world to the other".

But Moses answered him: "(I fear) lest I bring guiltiness upon myself".

Metatron said to him: ''Receive [Kabbalah] the [22] letters of the oath, in (by) which there is no breaking the covenant" (which precludes any breach of the covenant). - From The Third Book of Enoch

"The expression, [heavenly host or] "Congregation of Israel," in the first instance, refers to the [archetypes] first born sons of Light, or, as they are termed in the Book of Job, the morning stars, who, along with the Sons of Elohim, sang their song of praise [as one - Ehad] at the creation of the world. In an extended sense, it includes [Metatron and any of] the true children of light [from any religion] who have attained unto the Divine Life [Kether]." - Zohar

"Indeed, we Gnostics are the elect ones, possessors of three great treasures that are:
A) The Philosophical Stone
B) The Clavicle of Solomon
C) The Books of Genesis of Enoch." - Samael Aun Weor, The Three Mountains