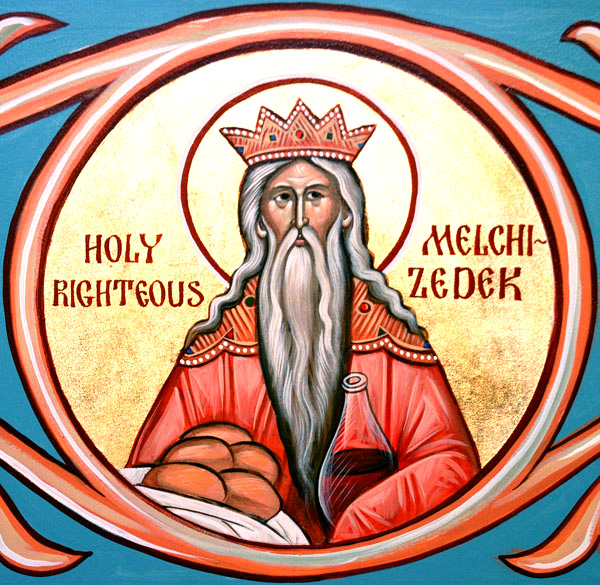 "Malkhi-tzedek king of Salem brought forth bread and wine. He was a priest to God, the Most High. He blessed [Abram], and said, 'Blessed be Abram to God Most High, Possessor of heaven and earth. And blessed be God Most High, who delivered your enemies into your hand.' [Abram then] gave him a tenth of everything." - Genesis / Bereshit 14:18-20

"[Jesus] Who in the days of his flesh, when he had offered up prayers and supplications with strong crying and tears unto him that was able to save him from death, and was heard in that he feared; Though he were a Son, yet learned he obedience by the things which he suffered; And being made perfect, he became the author of eternal salvation unto all them that obey him; Called of God an high priest after the order of Melchisedec. Of whom we have many things to say, and hard to be uttered, seeing ye are dull of hearing." - Hebrews 5

"Melchisedec is the planetary Genie of the Earth, of whom Jesus, the great Kabir, gave testimony. Melchisedec is the Great Receiver of the Cosmic Light. Melchisedec has a physical body. He is a Man, or better if we say, he is a Super-Man. The Kingdom of Agharti is found in the subterranean caverns of the Earth. The Earth is hollow and the network of caverns constitute Agharti. The Genie of the Earth lives in Agharti with a group of survivors from Lemuria and Atlantis. The Goros, powerful Lords of life and death, work with Melchisedec. The whole ancient wisdom of the centuries has been recorded on Stone, within the Kingdom of Agharti." - Samael Aun Weor, The Gnostic Bible: The Pistis Sophia Unveiled

"If Jesus was God incarnate, as the solemn councils of the church discovered, why is He referred to in the New Testament as "called of God an high prim after the order of Melchizedek"? The words "after the order" make Jesus one of a line or order of which there must have been others of equal or even superior dignity. If the "Melchizedeks" were the divine or priestly rulers of the nations of the earth before the inauguration of the system of temporal rulers, then the statements attributed to St. Paul would indicate that Jesus either was one of these "philosophic elect" or was attempting to reestablish their system of government. It will be remembered that Melchizedek also performed the same ceremony of the drinking of wine and the breaking of bread as did Jesus at the Last Supper." - Manly P. Hall, The Secret Teachings of All Ages

Learn more about Melchizedek and the prayer for Saturday the 13th: A New Heaven and Earth