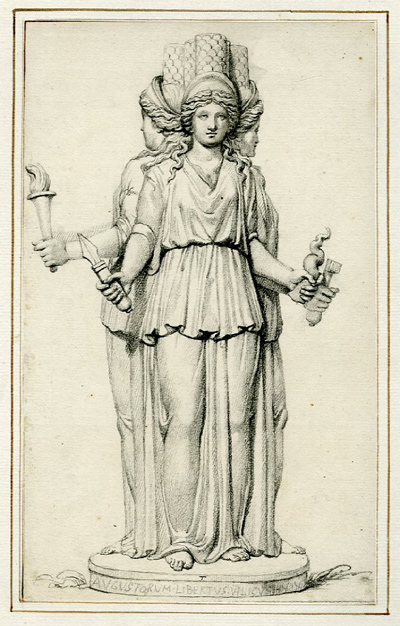 (Hecate; Greek Ἑκατη) Virgin goddess of the Greek mysteries, one of the symbolic aspects of the Divine Mother. She was often represented with three faces, a symbol of the eternal trinity. While always worshipped as one of the highest aspects of divinity, because she had dominion over the three worlds (heaven, earth, and hell) as demonstrated by the aid she gave to Persephone and her role in guiding the suffering souls in the underworld, some later cults used her name in reference to witchcraft and black magic, demonic interests that the Greek mysteries were steadfastly opposed to.

"Hekate whom Zeus the son of Kronos honoured above all. He gave her splendid gifts, to have a share of the earth and the unfruitful sea. She received honour also in starry heaven, and is honoured exceedingly by the deathless gods . . . For as many as were born of Gaia (Earth) and Ouranos (Heaven) [the Titanes] amongst all these she has her due portion. The son of Kronos [Zeus] did her no wrong nor took anything away of all that was her portion among the former Titan gods: but she holds, as the division was at the first from the beginning, privilege both in earth, and in heaven, and in sea. Also, because she is an only child, the goddess receives not less honour, but much more still, for Zeus honours her." - Hesiod, Theogony 404 (C8th or C7th B.C.)

"[After Persephone was returned from the underworld to Demeter:] Then bright-coiffed Hekate came near to them, and often did she embrace the daughter of holy Demeter: and from that time the lady Hekate was minister and companion to Persephone." - Homeric Hymn 2 to Demeter 436

As an archetype, she has similarities to other archetypes, such as Isis, which was even mentioned by Lucius Apuleius:

"I am she that is the natural mother of all things, mistress and governess of all the elements, the initial progeny of worlds, chief of powers divine, Queen of heaven, the principal of the Gods celestial, the light of the goddesses: at my will the planets of the air, the wholesome winds of the Seas, and the silences of hell be disposed; my name, my divinity is adored throughout all the world in divers manners, in variable customs and in many names, [...] Some call me Juno, others Bellona of the Battles, and still others Hecate. Principally the Ethiopians which dwell in the Orient, and the Egyptians which are excellent in all kind of ancient doctrine, and by their proper ceremonies accustomed to worship me, do call me Queen Isis." - Lucius Apuleius, The Golden Ass

"Proserpine, the Queen of Hell, is also Hecate, the blessed Goddess Mother Death, under whose direction the Angels of Death work. The Mother Space converted into the Mother Death loves her sons and daughters in a very odd way, for she takes them away." - Samael Aun Weor, Tarot and Kabbalah

"Suddenly, something unusual happened beyond the muddy waters of Aqueronte. The horrible door that gives access to the abode of Pluto turned upon its hinges of steel... Intensely moved, I shook myself, I forebode that something amazing had happened. I was not mistaken... I saw her, it was she, the unmanifested Kundalini. She had crossed the threshold where the lost souls abide... Magnificent Madonna, excellent, extraordinary, and terrifically divine, she approached me with a magistral step. I did not know what to do, I was confused, I simultaneously felt fear and love... A cosmic reminder? Recrimination? The Beloved One spoke with a voice from paradise. She blessed me, and then continued on her way as if she was going towards the frightful walls of the city of Dis. In those moments, from within the depth of my consciousness, I felt that she wanted also to help the others who dwelled around that city of pain where no one can enter without just indignation..." - Samael Aun Weor, The Three Mountains