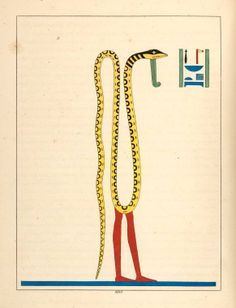 Also variously as Chnubis, Chnoubis, etc. A symbolic figure found in Egyptian, Greek, Roman, and Gnostic traditions with a variety of forms and appearances.

"In old Egypt, the God Nahbkoon, "he who unites the doubles," (astral light re-uniting by its dual physiological and spiritual potency the divine human to its purely divine Monad, the prototype "in heaven" or Nature) was represented as a serpent on human legs, either with or without arms. It was the emblem of the resurrection of Nature, as also of Christ with the Ophites, and of Jehovah as the brazen serpent healing those who looked at him; the serpent being an emblem of Christ with the Templars also, (see the Templar degree in Masonry). The symbol of Knouph (Khoum also), or the soul of the world, says Champollion (Pantheon, text 3), "is represented among other forms under that of a huge serpent on human legs; this reptile, being the emblem of the good genius and the veritable Agathodaemon, is sometimes bearded." The sacred animal is thus identical with the serpent of the Ophites, and is figured on a great number of engraved stones, called Gnostic or Basilidean gems. This serpent appears with various heads (human and animal), but its gems are always found inscribed with the name [[CHNOUBIS]] (Chnoubis). This symbol is identical with one which, according to Jamblichus and Champollion, was called "the first of the celestial gods"; the god Hermes, or Mercury with the Greeks, to which god Hermes Trismegistos attributes the invention of, and the first initiation of men into, magic; and Mercury is Budh, Wisdom, Enlightenment, or "Re-awakening" into the divine Science.... The symbol of Chnouphis, or the soul of the world, writes Champollion, "is among others that of an enormous serpent standing on human legs; this reptile, the emblem of the good genius, is a veritable Agathodaemon. It is often represented bearded. . . . . That sacred animal, identical with the serpent of the Ophites, is found engraved on numerous Gnostic or Basilidean stones . . . . The serpent has various heads, but is constantly inscribed with the letters [[CHNOUBIS]]." Agathodaemon was endowed "with the knowledge of good and evil," i.e., with divine Wisdom, as without the former the latter is impossible. Repeating Iamblichus, Champollion shows him to be "the deity called [[Eichton]] (or the fire of the celestial gods -- the great Thot-Hermes), to whom Hermes Trismegistus attributes the invention of magic." —HP Blavastsky, The Secret Doctrine

"...the Solar Gnostic Chnouphis, the Christus Agathodaemon, the serpent of Genesis, the Nahuatl Lucifer [Xolotl], the resplendent dragon of wisdom."—Samael Aun Weor