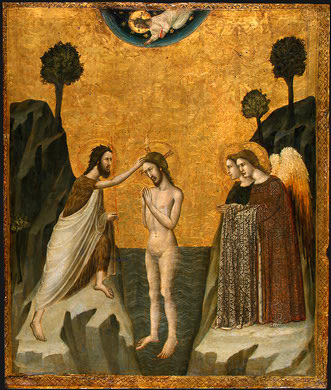 From Greek baptizein or baptizo, "I wash," which originates from "bapto," "to dip."

An ancient ritual visible in some form within all the world's religions. While baptism is usually associated with Christanity, it is derived from the Jewish טְבִילָה tevilah, a full body immersion in a mikveh.

Baptism or ritual immersion in water symbolizes the descent of the energy of the "water of life" or primeval womb (chaos) as a blessing upon the soul who seeks to become pure of blemish. The ritual bath or immersion represents a pact of sexual purity, in which the soul promises to become clean of animal lust.

In the esoteric aspect, baptism is the absorption of the image of God (Tzalem) by means of sexual transmutation.

"It is relevant to clarify, once and for all, beloved brothers and sisters, that baptism clearly and specifically symbolizes the sexual work with the ens seminis within which the whole ens virtutis of the fire is found in a potential state." —Samael Aun Weor