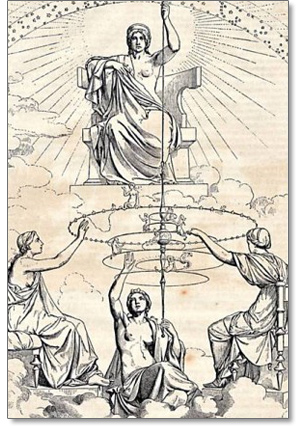 (Greek) Ananke or Anagke comes from the ancient Greek Ανάγκη, a goddess representing destiny, necessity, and fate. She is a primeval goddess (protogenos) who emerged self-formed at the very beginning of existence, and is said to be a formless serpent encompassing all manifested existence. She emerged with her serpent mate Khronos or Cronos, the god of time. They are far beyond all other Gods. The daughters of Ananke are the three Fates.

"There is a law of stern Ananke (Necessity), the immemorial ordinance of the gods made fast for ever, bravely sworn and sealed: should any Daimon (Spirit or God), born to enduring life, be fouled with sin of slaughter, or transgress by disputation, perjured and forsworn, three times ten thousand years that soul shall wander an outcast from Felicity, condemned to mortal being, and in diverse shapes with interchange of hardship go his ways. The Heavens force him headlong to the Sea; and vomited from the Sea, dry land receives him, but flings unwanted to the burning Sun; from there, to the heavenly vortex backward thrown, he makes from host to host, by all abhorred." - Empedocles, Fragments (Greek philosopher C5th B.C.)

"[Prometheus bound to Mount Kaukasos:] Let him [Zeus] lift me on high and hurl me down to black Tartaros with the swirling floods of stern Necessity (anankê): do what he will, me he shall never bring to death [for Prometheus is immortal]." - Aeschylus, Prometheus Bound 1050

"And he [Epicurus] says that the world began in the likeness of an egg, and the Wind [Khronos (Time) and Ananke (Inevitability) entwined?] encircling the egg serpent-fashion like a wreath or a belt then began to constrict nature. As it tried to squeeze all the matter with greater force, it divided the world into the two hemispheres, and after that the atoms sorted themselves out, the lighter and finer ones in the universe floating above and becoming the Bright Air [Aither or Ouranos] and the most rarefied Wind [Khaos the Air?], while the heaviest and dirtiest have veered down, become the Earth (Ge), both the dry land and the fluid waters [Hydros or Pontos?]. And the atoms move by themselves and through themselves within the revolution of the Sky and the Stars, everything still being driven round by the serpent-form wind [Khronos and Ananke?]." - Orphica, Epicuras Fragment (from Epiphanius)

"I [Prometheus] must bear my allotted doom [to be chained to a mountain] as lightly as I can, knowing that the might of Necessity (anankê) permits no resistance." - Aeschylus, Prometheus Bound 103

"And there were another three who sat round about at equal intervals, each one on her throne, the Moirai (Fates), daughters of Ananke, clad in white vestments with filleted heads, Lakhesis, and Klotho, and Atropos, who sang in unison with the music of the Seirenes, Lakhesis singing the things that were, Klotho the things that are, and Atropos the things that are to be . . . Lakhesis, the maiden daughter of Ananke (Necessity)." - Plato, Republic 617c (trans. Shorey) (Greek philosopher C4th B.C.)