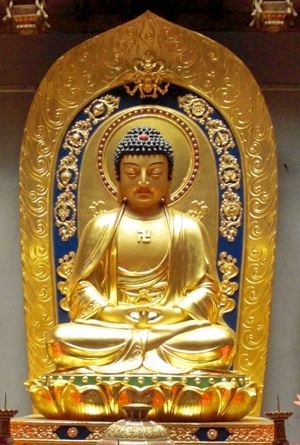 "Shariputra, what do you think? Why is this Buddha called Amitabha? Shariputra, the brilliance of that Buddha's light is measureless, illumining the lands of the ten directions everywhere without obstruction. For this reason he is called Amitabha. Moreover, Shariputra, the lifespan of that Buddha and that of his people extends for measureless, limitless asamkhyeyas of kalpas. For this reason he is called Amitayus." - Sutra of the Buddha's Teaching on Amitabha

Amitabha has significance in all schools of Buddhism, but with much variation and interpretation.

Like all Buddhas, Amitabha is both (1) an archetype within the consciousness of every sentient being, and (2) a human being who acheived liberation.

In Tibetan Buddhism, there are many important figures connected with Amitabha (whether as incarnations or emanations), including Padmasambhava, the Dalai Lamas, the Panchen Lamas, the Karmapas, and more.

H.P. Blavatsky stated in The Secret Doctrine that Amitabha is the inner Being (Contemplation Buddha) of Gautama and Tsong Khapa:

"...according to the Orientalists, there are five Dhyanis who are the "celestial" Buddhas, of whom the human Buddhas are the manifestations in the world of form and matter. Esoterically, however, the Dhyani-Buddhas are seven, of whom five only have hitherto manifested, and two are to come in the sixth and seventh Root-races. They are, so to speak, the eternal prototypes of the Buddhas who appear on this earth, each of whom has his particular divine prototype. So, for instance, Amitabha is the Dhyani-Buddha of Gautama Sakyamuni, manifesting through him whenever this great Soul incarnates on earth as He did in Tzon-kha-pa. As the synthesis of the seven Dhyani-Buddhas, Avalokiteswara was the first Buddha (the Logos), so Amitabha is the inner "God" of Gautama, who, in China, is called Amita(-Buddha)." - The Secret Doctrine Vol. 1

"Let us remember Tsong Khapa who reincarnated in Tibet; he was the Buddha Gautama previously. The Buddha of Buddha Amitabha is another thing, his true divine prototype. Amitabha is the Contemplation Buddha, and Gautama, we could say, is the Manifestation Buddha, the worldly Buddha or Bodhisattva. We cannot deny that Amitabha expressed himself brilliantly through Gautama. We cannot deny that later Amitabha sent Gautama (the Bodhisattva or worldly Buddha) directly to a new reincarnation. Then he expressed himself as Tsong Khapa." - Samael Aun Weor from "Mental Representations"

"In the White Lodge, the name of the “Higher Self ” is revealed to the disciple — that is to say, the name of the disciple’s Innermost, which is the name his Monad has been always named in all the karmic books through all eternity. For example, in the inner worlds the Buddha Gautama is named Amitabha..." - Samael Aun Weor, The Revolution of Beelzebub

"There are kingdoms of inconceivable happiness that the disembodied one must make the effort to enter; let us remember the Blissful Kingdom of the West governed by Amitabha Buddha." - Samael Aun Weor, Practical Astrology