The first great deed of the Buddha's initiatic life is his promise.

It is related in the Tibetan traditions that the Buddha Shakyamuni, before he received that title, was known by the name Shvetaketu, and that he was a great and enlightened Master, who was teaching in the heavens (in the superior dimensions), teaching the Dharma (spiritual wisdom) to the Gods. He had achieved this level through countless previous existences. (Some of the stories of his previous existences can be found in a collection called the Jataka tales.)

Shvetaketu (which means "White Banner") was teaching in the Tushita Heaven. This is a realm of Nirvana, a superior level of existence, populated by Gods, or in other words, beings who had already achieved a certain degree of understanding; they had certain degrees of initiation. There are many levels of Beings, which correspond to the many levels of consciousness, and each being dwells in the realm that relates to his or her own level of consciousness.

As this Buddha was teaching the Gods – what we can also call Angels or Archangels - he was reminded of his promise to return once again to the physical world in order to teach human beings. Some time previously, he had promised to descend into the world at the time when it was most ripe, in a time when it was most needed. 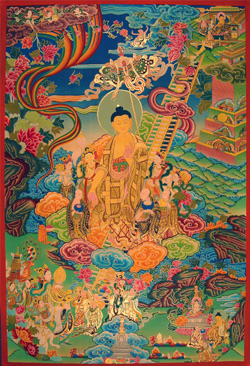 When he looked down on this physical world, he saw the suffering of humanity, and he considered whether it was time. The Gods encouraged him and said, "It is important for you to go teach the Dharma." And they said, "The world is in ruin because of the 6 dialecticians, the 6 followers, and the 6 meditators." In other words, the world is in ruin because of 666. If you have studied Christianity, you know the significance of this number.

And I beheld another beast coming up out of the earth; and he had two horns like a lamb, and he spake as a dragon.

And he exerciseth all the power of the first beast before him, and causeth the earth and them which dwell therein to worship the first beast, whose deadly wound was healed.

And he doeth great wonders, so that he maketh fire come down from heaven on the earth in the sight of men,

And he causeth all, both small and great, rich and poor, free and bond, to receive a mark in their right hand, or in their foreheads:

And that no man might buy or sell, save he that had the mark, or the name of the beast, or the number of his name.

Here is wisdom. Let him that hath understanding count the number of the beast: for it is the number of a man; and his number is Six hundred threescore and six (666). – Revelation 13:11-18

Christians of these times read this passage literally and miss the symbolic significance of it, because to their misfortune they ignore that the Book of Revelation of St. John is a book of kabbalistic symbolism. But let us go deeper than the literal meaning, and discover the real meaning hidden in the symbol.

The Gods told the Buddha that the world is in ruin because of 6 dialecticians. And what is a dialectician? It is someone who utilizes a dialectic, intellect, reasoning, in other words, what the bible calls “scribes.”

Then spake Jesus to the multitude, and to his disciples, saying, The scribes (intellectuals) and the Pharisees sit in Moses' seat: All therefore whatsoever they bid you observe, that observe and do; but do not ye after their works: for they say, and do not. – Matthew 23:1-3

But woe unto you, scribes and Pharisees, hypocrites! for ye shut up the kingdom of heaven against men: for ye neither go in yourselves, neither suffer ye them that are entering to go in. - Matthew 23:13

Woe unto you, scribes and Pharisees, hypocrites! for ye make clean the outside of the cup and of the platter, but within they are full of extortion and excess.

Thou blind Pharisee, cleanse first that which is within the cup and platter, that the outside of them may be clean also.

Woe unto you, scribes and Pharisees, hypocrites! for ye are like unto whited sepulchres, which indeed appear beautiful outward, but are within full of dead men's bones, and of all uncleanness.

Even so ye also outwardly appear righteous unto men, but within ye are full of hypocrisy and iniquity. – Matthew 23:25-28

The world is in ruin because of 6 intellectuals; in other words, because of the Arcanum 6 and the psychological tendency to intellectualize the spiritual teachings: to just memorize the scriptures, or fill the head with many theories, but to stop there, and thereby fail to gain real experience of the Truth.  Religions are filled with scribes: people who really look like they know the teachings, and speak very well, and teach, and recite, but who are really just white tombs, as Jesus said, because they have no real development inside, spiritually and psychologically.

The Gods, the Angels, the Masters, said that the world is also in ruin because of 6 believers, in other words, what Jesus calls Pharisees. These are those people who love to look religious, who are very devoted to their tradition, but who also lack any real development or experience of the Truth.  We can call them “believers” because they often say that faith is all you need, to merely believe.  Of course, we know that faith without works is dead, and by works is meant internal, spiritual, psychological works: the accomplishment of initiations in accordance with the awakening of the consciousness. Fanatics and those who merely believe do not enter into initiation, nor do they allow others to enter, instead they criticize, attack, and crucify the initiates.

And the world is in ruin because of 6 meditators, or those who believe that merely through willpower they can reach liberation from suffering.  This includes people who practice all kinds of yogas or penances, yet who fail to work with the consciousness from moment to moment. 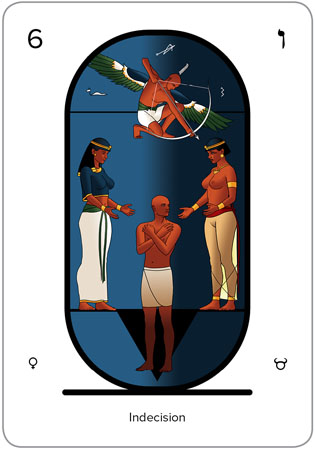 In the Bible, in the Book of Revelation, the Antichrist, the great dragon, the cause of suffering, is identified as having the value of 666. In Gnosis, we study kabbalistic numerology very deeply, and the number 6 figures significantly in the life of the Buddha, and in the bible. The Arcanum 6 is the Arcanum of Indecision, which represents in its image an initiate standing between two women: a virgin and a whore; in other words, two aspects of the Divine Mother, two aspects of Maya.

The “intellectual animal,” any person like us, is given the value of 666, because we are undefined: we stand between the virgin and the whore, psychologically speaking. In other words, we are trapped in the midst of illusion and have the necessity of choosing the virgin or the whore, truth or illusion, desire or liberation. This decision is made from moment to moment, and is determined by our actions.  In each moment, we choose the Virgin or the Whore by our deeds. This choice is transformed into action through our three brains.

We are a 6 in our intellect because we are always caught in the duality between right and wrong, yes and no, black and white. The intellect – being trapped in the mechanism of duality – keeps us undefined, especially when we idolize and enthrone the intellect. Unfortunately, the intellect on its own cannot resolve it’s conflicts.  This is illustrated by those who overdevelop the intellect and thereby lose contact with their heart, and fail to develop themselves in a balanced way.

We are a 6 in our heart (emotional brain) because we are always caught in the duality between pleasant and unpleasant feelings, between like and dislike, love and hate, anger and sweetness, etc. The emotional brain keeps us undefined especially when we idolize and enthrone our emotions, and fail to use reasoning to balance the desires of the heart. Those who are swept through life by surging emotions quickly become exhausted and sick in the heart.

We are a 6 in our body (motor-instinctual-sexual brain) because we are always caught in the duality between action and inaction, pleasant and unpleasant sensations, to do or not to do. We remain undefined in this brain especially because we are so identified with sensations, and none is more powerful than the sensations of sex. Because of our addiction to sexual sensation, we remain slaves of the Whore, and continue walking deeper into darkness.

So, when the Gods tell the Buddha that the world is in ruin because of the 666, they are saying the world is in ruin because of the ego: how the ego utilizes the intellect through being dialectician (through being too intellectual), through the heart by being a Pharisee (a fanatic, a mere believer without any real experience of the truth), or by being, what they call a meditator (a fakir, someone who does a lot of practices, who is very adamant about their own tradition and their own religion, but is fanatic and attached).

In each of these examples, what we are seeing is a fundamental aspect of Gnostic psychology, which indicates that we all have a kind of psychological predisposition related to one of these three brains. Some of us are more intellectual by nature, some of us are more emotional, and some of us are more instinctive. The Gods told Buddha, the world is in ruin, because of these three types of people. In the bible, this is called the Tower of Babel. These are the three inferior types of people. Whether we are more intellectual, more emotional, or more impulsive, so long as we are stuck in these three types we are enslaved to the wheel of Samsara, and are dwellers of the Tower of Babel. Remember, the story of the tower is related to the confusion of tongues: the inability for different kinds of people to understand each other.  The intellectual type (the scribe, the dialectician) cannot understand the believer (the Pharisee), therefore conflict ensues in our relationships, in our homes, and between nations.

The entirety of this situation – the Tower of Babel – is the dragon of Revelation. The collective mind of humanity makes wonders, like atomic bombs, movies, new technologies, new religions, and more, but all of this only serves to enforce the doctrine of the ego: psychological slavery. Anyone who questions the “wonders” of our modern life is condemned, rejected, ridiculed. This is the nature of the beast: the ego, who leads its followers to “neither go in (to liberation from the ego), neither suffer ye them that are entering to go in (to liberation).”

The path to liberation begins with transforming ourselves into a different kind of person psychologically.   This is to become a type of person who commands the three brains within, and is no longer undefined; in other words, this type of person knows themselves, and can consciously choose the Virgin (the Divine Mother) in every action, from moment to moment. This is to perform Upright Action in our thoughts, feelings, and actions. But to do this, we need to know how.

The Buddha recognized the sad spectacle of humanity, and made the decision to manifest, to consciously incarnate in order to teach those who want to know how to exit suffering. In other words, the Contemplation Buddha, the Inner Master, the Inner Spirit, chose the time, date, place, and circumstances of his birth, and projected himself into nature in order to help humanity. The Bodhisattva was sent to help humanity.