The following text was utilized as the basis for discussion in a lecture of the free online course about the real meaning of the Book of Revelation.  The transcription is not yet available. 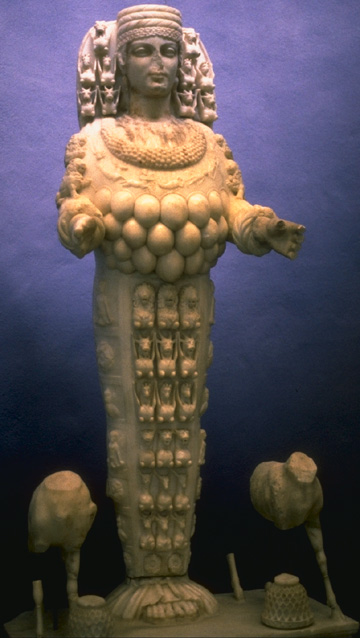 Ephesian Artemis, Queen of the positive magic of the Moon

"Unto the angel of the church of Ephesus write; These things saith he that holdeth the seven stars in his right hand, who walketh in the midst of the seven golden candlesticks..."

"Unto the angel (or Atomic Intelligent part of your Being) of (the cosmic forces congregated in the chakra Muladhara, which in your spinal medulla is) the church of Ephesus (where the Ephesian Artemis Queen of the positive Magic of the Moon [Jehovah] dwells; because" Epeshu means "to enchant" in Babylonian language) write (practice Sexual Magic, so that by virtue of chastity, meaning, by means of Kriya-Shakti - the action of the female or generative principle – your creative fires can awake and rise to join the fires of the Holy Spirit in your pineal gland); These things says (with the voice of the silence) he (the Christ or Cosmic Fire) that holds (all the igneous power of) the seven stars (or Seven Logoi of this Solar System) in his right hand (in just right activity), (a Divine and Creative Fire) who walks (as a Feathered Serpent) in the midst of (your seven spinal medullas or) the seven golden candlesticks (in your seven bodies)..."

"I know thy works, and thy labour, and thy patience, and how thou canst not bear them which are evil: and thou hast tried them which say they are apostles, and are not, and hast found them liars: And hast borne, and hast patience, and for my name's sake hast laboured, and hast not fainted. Nevertheless I have somewhat against thee, because thou hast left thy first love."

"I (the Sacred Fire of the Holy Spirit, that dwells in your sexual organs) know (by means of "Daath", Tantric Knowledge) your works (in the Flaming Forge of Vulcan), and your labor, and your patience (in scientific chastity) , and how you cannot bear (the filthy spasm, the abominable orgasm of) them which are evil (fornicators): and you hast tried (the chastity of) them which say they are (Gnostics or) apostles, and are not (because they ejaculate the seminal liquor), and (for that reason) has found them liars (because through the orgasm they become disconnected from the Solar Atoms of the Solar Christ - the way, the truth, and the life): And has borne (the karma of your egos related with Karmasaya and Kamaduro), and has patience (when meditating on these lustful egos), and for my name's sake (or Ruach Elohim, the spermatic fiat that moves upon the surface of your sexual waters) has labored (through sexual transmutation), and has not fainted (has not identified with the corrupted world). Nevertheless I have somewhat against (those lustful egos of) you, because (they are the cause that) you have left your first love (your Divine Goddess Mother Jehovah Eloah)."

"Remember therefore from whence thou art fallen, and repent, and do the first works."

""Remember therefore (that in your subconsciousness you have the memory) from whence you have fallen (as consciousness, part of your Monad), and repent (renounce fornication and adultery in the 49 levels of your mind), and do the first works (of scientific sexual transmutation)."

"Or else I will come unto thee quickly, and will remove thy candlestick out of his place, except thou repent. But this thou hast, that thou hatest the deeds of the Nicolaitans, which I also hate. He that hath an ear, let him hear what the Spirit saith unto the churches; To him that overcometh will I give to eat of the tree of life, which is in the midst of the paradise of God."

""Or else (if you continue with fornication) I will come unto you quickly (within your psychological interior), and will remove your candlestick (or Spiritual Solar Fire) out of (the Church of Ephesus or Chakra Muladhara) his place, except you repent (renounce the sexual act with orgasm) . But this you have (you who transmute you sexual libido), that you hate the deeds of the Nicholaitans, (which are people who enjoy the ejaculation of the seminal liquor) which I also hate. He that has an (awaken spiritual) ear (Chakra Vishuddha), let him hear what the Spirit (that moves over the surface of the seminal waters) says unto the churches (or magnetic centers of the spinal medulla); To him that overcomes (his passional lust) will I give to eat of the tree of life (which are the spiritual fruits or seven superior senses or seven Chakras or Churches), which is in the midst of (the spinal medulla) the paradise of my (Igneous) God."