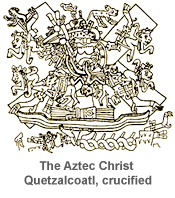 Unquestionably, the theme of Quetzalcoatl is transcendental and deserves to be reflected upon profoundly.

First of all, I have to emphatically state with complete clarity that Quetzalcoatl is not a myth.  Unquestionably Quetzalcoatl is the great Word, the Platonic Logos, the Demiurge Architect of the Universe, the Creator.

When we study Quetzalcoatl, we then discover that within it there exists the same Cosmic Drama of Yeshua Ben Pandira (Jesus Christ).  Quetzalcoatl carrying his cross on his shoulders reminds us precisely of the Martyr of Calvary.

Thus, indeed, Quetzalcoatl is the Logos; he is what is, what was, and what will always be; he is the life that palpitates within every sun.  So before the Universe came into existence, Quetzalcoatl already existed.

It would be impossible to accept, in any sense, a mechanism without a mechanic, as the materialist anthropologists believe.  We must never stop comprehending that behind any mechanism there most always exists intelligent principles. Quetzalcoatl is the Multiple Perfect Unity, the Cosmic Christ.

Thus, we must not only study Quetzalcoatl from the literal point of view, but rather we must analyze him judiciously in light of the most diverse theologies.  Quetzalcoatl, as fire that inhabits within every universal nucleus, expresses itself in everything that is, that has been and that shall be.

Therefore, the Quetzalcoatls, the Deukalions, the Hermes Trismegistus, the Buddhas, can never be comprehended without previously having known the Christic Mysteries.  Indeed, beyond a doubt, Quetzalcoatl is a seed of remote places... a force of unknowable destinies for this present humanity; it is the “living germ of the Super-man.” 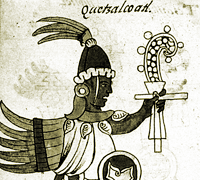 This is what Quetzalcoatl is; and as an intelligent principle he can unite the Macrocosm to the Microcosm within the heart of any human being.

Unquestionably, Quetzalcoatl as the Universal Tree is highly symbolic.  Let us remember the “Greek eroticism;” there is no doubt that the horizontal ectais (feminine uterus) rightly connected with the vertical phallus (masculine sexual organ) form a cross.  The four points of the cross are Science, Philosophy, Art, and Mysticism.

To connect the soul with the Spirit, the Microcosmic with the Macrocosmic, is only possible through the mysteries of the Lingam-Yoni and Pudenda.

Indeed, if we ignore the mysteries of the Aztecs, Zapotecs, Toltecs, etc., it will be impossible to achieve within ourselves the integral fusion of the Spirit with the soul .  The mysteries of sex are transcendental and are exposed in the cross; I repeat: the intersection of the vertical lingam with the horizontal ectais form a cross, and the mysteries of sex were taught by our Lord Quetzalcoatl. Quetzalcoatl was indeed incarnated. He was converted into a living man and was not merely a historical personage.

Quetzalcoatl, the Cosmic Christ, the Platonic Logos, the Greek Demiurge, is a Multiple Perfect Unity. 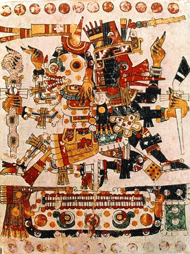 Unquestionably, when a human being finds his other complementary half he has found happiness...  Joyful be the man who finds his beloved woman.  Lets us remember that love starts with a spark of sympathy; then it substantializes with the force of affection and synthesizes into adoration.

A perfect matrimony is the union of two beings: one man and one woman,  one who loves more and the other who loves better.  Love is the best religion.

Our mind, our heart is submitted to the Law of the Pendulum.  The nations themselves move in accordance with the Law of the Pendulum. Nations which in other epochs were profoundly religious, when the pendulum moved, when the pendulum situated itself to the opposite side, they became materialists.  When the pendulum returned to its primeval original state, then they became very religious once again.  This is the case of present Russia. The major production of parapsychology according to calculations comes from Russia; this indicates that spirituality is starting to emerge from within Russia. Likewise, this shall occur again in China, then the words of Quetzalcoatl will be fulfilled. When the pendulum returns to its original primeval point, a new spirituality will appear amongst the Chinese, and then their history will change.

It is stated that Quetzalcoatl in vespers of his judgment, when condemned to death, fell into the temptation of becoming immortal.  This deserves profound reflection: it is by means of the love between a man and a woman, by means of sex, that we can transform and convert ourselves into immortal and powerful beings.

It is stated that the Toltecs said:  Quetzalcoatl, Tula succumbs, Tula is wrecked!

Yes, it is finished, the lost Eden is finished, the distant Tula turned into ashes, the Garden of Eden, and the Garden of Hesperides became cosmic dust.  The human being lost his transcendental faculties and converted himself into a beggar, he abandoned ancient wisdom, he degenerated completely; yet now, only the glory of Quetzalcoatl in this Universe can radically transform us and convert us into super-humans.

The fallen Gods became demons!  Who could deny it?  What happened with the great Hierophants of the past: such as the biblical Moses, and Hermes Trismegistus, those who governed the entire Nature?  Where are they?  It is stated that Quetzalcoatl declared that the fallen Gods transformed themselves into demons, Kings into vassals and the slaves into nothing!

We are in a terribly Dark Age!  We need to regenerate ourselves; we need to study in depth the Quetzalcoatlian mysteries.  We need to carry this message of our Lord Quetzalcoatl throughout all of America, so that America can burn with the marvelous blazing glory of Quetzalcoatl.

The cycle is closed; the serpent bit its own tail!  The Edens of ancient times are lost, and now the human being with a hunchback is suffering and marching on his painful path, faraway, very faraway from the Quetzalcoatlian wisdom.  So, we need to return to the ancient wisdom and to make resplendent the mysteries of Anahuac over the face of the entire Earth.

The marvelous work of our Lord Quetzalcoatl should be chiseled with gold upon divine marble...

This Cosmic Drama that has been sketched in an extraordinary manner by Quetzalcoatl could not be missed in the sacred land of ancient times in Mexico.  Obviously, Quetzalcoatl shines in the ineffable cosmos because he is the Logos, a Multiple Perfect Unity.

Quetzalcoatl is that same Word, the enchanted Word. So before the Universe came into existence, Quetzalcoatl already existed. Quetzalcoatl is the feathered serpent that was writhing within the cosmic dust in the Omeyocan, when life was hardly dawning in this solar system.  Therefore, Quetzalcoatl is in itself the same Platonic Logos, the Hebraic Chrestos, and the Hindustani Vishnu. 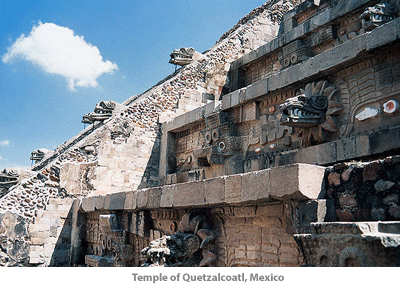 Unquestionably, Quetzalcoatl as the Nahua-Mexica Christ is the fundamental center of the Cosmic Drama.

Indeed, beloved reader, the most glorious moment for us has arrived in which the first flame in our comprehension has been lit within our intelligence.

Let us start to comprehend that the Logos can be seen in different ways:  now, from the Hebraic angle, or from the Egyptian angle, and we can also study it in light of Archaic Mexico. Quetzalcoatl as Chrestos, as Vishnu, as Logos, is the Verb, the Word.

Quetzalcoatl is the one who resuscitates among the dead, the one who gloriously shines within the incommensurable infinite space; he is glory, light and sapience.

One past day, we also, as Quetzalcoatl, lost that marvelous Eden to which the Hebraic Genesis refers; we left the Jordan of the Hesperides, and we abandoned the Elysian Meadows when we fell into animal fornication.  However, before our sight there is a guide, an extraordinary and marvelous guide, who indicates to us the way of liberation: that guide is Quetzalcoatl!

Beloved reader, the cross that Quetzalcoatl carries is formidable; that formidable cross is the Tree of the Universe. It contains the very secret of the doctrine of Quetzalcoatl.  Let us think again for a moment on the vertical Lingam and the horizontal Yoni. Unquestionably, the insertion of the vertical phallus inside the horizontal Cteis form a cross, and that is the cross that Quetzalcoatl carries over his shoulders, the same cross that the great Kabir Jesus carries towards Calvary; that is the splendid cross of all ages.

Beloved reader, unquestionably, if the cross is an instrument of torture and martyrdom, indeed it is also the instrument of liberation.

In the ancient times of Lemuria, the key of the Ark of Science was known. At that time those men and women who still had not lost their Edenic innocence were uniting in the temples of mysteries in order to reproduce their species. However, they did not reproduce as the true human beings do, but rather, they reproduced as supermen.  Then, the power of Kriya-Shakti was openly accepted.  Men and women were reunited in order to create and to create anew.  But, they never spilled the Cup of Hermes Trismegistus, the three times Great God Ibis of Thoth. Thus, as a consequence or corollary, the Sacred Serpent (Quetzalcoatl) ascended through the dorsal spine of those sacred human beings.  Those creatures had power over the fire, over the air, over the waters and over the perfumed earth.

Later on in time, human beings fell into animal generation and as a sequence or corollary, they spilled the Cup of Hermes; they lost all of their powers.

Quetzalcoatl (their Feathered Serpent) fell; yes, Quetzalcoatl fell; however, all of us can walk towards the Red Land, towards the Land of our Ancestors, towards the land of our Forefathers, so that we may once more attain the light of  splendor.  Only if we arrive at this blessed land will we attain the Resurrection; this is how the figure of Quetzalcoatl will appear again within each one of us, here and now.  This is how we will shroud ourselves with glory.  This is how we will cloak ourselves with splendors and once again have the powers that dominate the air, the fire, the water, the earth and all of the elements of Nature in general.

We, the Gnostics, have the clue of all empires and the key of all powers. We can make the earth tremble and the hurricanes move, because we know the secret of Quetzalcoatl. This secret is ignored by the swine of materialism; this secret is the Great Arcanum!