A Meeting with the Dalai Lama

From a Conversation of Samael Aun Weor with Students (1976)

Samael Aun Weor: Recently, I performed an investigation in the internal worlds. I decided to investigate which places in Tibet still had transcendental esoteric values. I reviewed several Buddhist monasteries, trying in this way to discover if in those places there are people with authentic spiritual values. Do you know what I found?

Samael Aun Weor: Well, I found that in many of those places that are taken as holy and transcendent, there were a large number of homosexuals. Yes, my dear brothers and sisters! I found many homosexual lamas in many of those places! The evil of the world is so great that even the sacred lands of Tibet have fallen into its snares. It is a real pity!

Students: But, Master, what about those people who surround the Dalai Lama? Are they also degenerated people?

Samael Aun Weor: Well, well... I have to tell you that I recently visited the Dalai Lama — obviously in my astral body. The Dalai Lama greeted me accompanied by an entourage of officers, a staff of attendants. When I arrived close to him, first I managed to observe with my mystical vision those who supposedly were the officers of the Dalai Lama! I investigated them one by one, thus I came to the conclusion that they were merely lunar men [lacking the solar bodies]. Then, I came close to the Dalai Lama and told him in his ear: “Do you know that these, your officials, are lunar people? I mean, that they are not true humans?”

Then, the Dalai Lama seized me by the arm, and guiding me away from them, said, “Yes, I know it, but please don't say to them anything about it, because they might abandon even the few spiritual principles they have. At least, as they are, they keep themselves in a straight line. Do you understand?”

“Of course! I understand,” I answered the Dalai Lama.

On the other hand, the Dalai Lama is something different. Indeed, he is a solar man. He is an individual who knows himself in depth.

[Editor’s note: The solar bodies are created through chaste sexual cooperation between man and woman, which is taught in the highest yoga tantra of Buddhism, and is unknown to those not yet prepared for it. Read these scriptures for more information about how this is hidden in Buddhism: Buddhist Scriptures, Gnosis of the Buddha Dharma, Gnostic Life of the Buddha.] 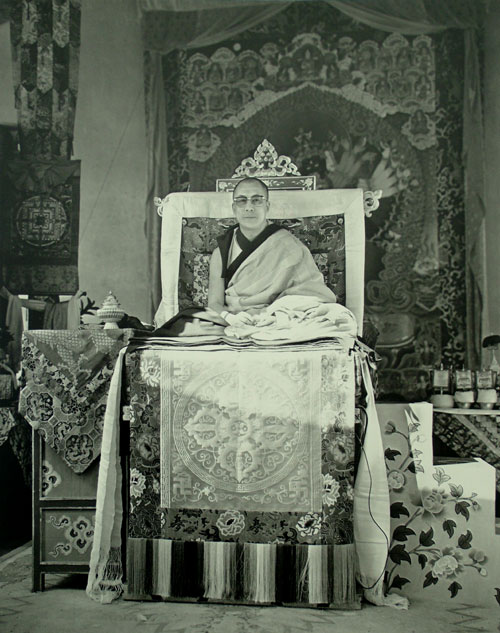 The 14th Dalai Lama at Kalachakra Initiation in 1974

By the way, I am going to narrate for you a wonderful experience that I had some time ago with this Dalai Lama, the same one who had to flee from Tibet when the Chinese communists arrived to destroy everything with their bloodthirsty hordes.

It happened that I was in the internal worlds of consciousness. All of a sudden, the Dalai Lama, accompanied by two officers, came to me. Once he was before my insignificant person, he said to me, “I would like a personal interview with you. I know that your real Being is the genie of war, thus I need to consult with you about some personal things, and others in regard to Tibet.”

“What is this condition?” The Dalai Lama questioned me.

“Well,” I told him, “I simply want this interview to be performed right now in the physical world, in my home in Mexico City. Do you accept?” I asked him.

Then I returned immediately into my physical body and woke up in this three dimensional world.

Some minutes passed, and suddenly I started to see the figure of the Dalai Lama emerging from the walls of my bedroom, appearing little by little together with two attendants behind him.

I said to myself, “Astounding, astounding! Indeed, he, as well as these two attendants, are experts in the Jinn state [the ability to move the physical body into the fourth dimension].”

Well, once in the physical world, the Dalai Lama asked me certain questions that I gladly answered. Thereafter, those two officers also consulted with me a bit.

Once that encounter finished and the farewells concluded, with astounding naturalness they began to withdraw, each of them with incredible ability. They just closed their eyes and concentrated, in themselves, and disappeared from the three dimensional world.

In this way I came to verify that the Dalai Lama handles the Jinn state, and some of his officers as well. Yet, not all of them enjoy that same faculty.