Editor's Note: To understand the following chapter, some background information is helpful. In ancient Greek mythology, Dionysus was the god of wine (remember the holy Eucharist) and the god of liberation through ecstasy, who promised salvation through rituals of love. Originally, like many ancient mystery schools, his tradition required chastity and moral purity. Of course, his worship gradually degenerated into orgies of sensual desire and indulgence in many forms of intoxication. Nowadays, everyone thinks of Dionysus as a drunkard, but this is only a reflection of the mind of humanity, not the God Himself. Mammon is a word appearing in the Bible: "No one can serve two masters, for either he will hate the one and love the other; or else he will be devoted to one and despise the other. You can't serve both God and Mammon." (Matthew 6:24) Mammon is usually interpreted as materialistic concerns, wealth, etc. 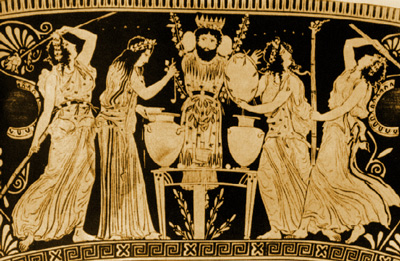 Followers of Dionysus prepare the wine amidst music and dance.

Unquestionably, Mammon and Dionysus can never be conciliated, because they are incompatible in their summaries as well as in their contents.

In an irrefutable, axiomatic way, we can and even must define Mammon with two terms:

It is urgent to correctly define Dionysus in the following precise and blunt way:

Now it is opportune to cite (amongst the lucky dates of this wretched, pygmoid humanity) the date February 4, 1962, and the hour between 2:00 and 3:00 in the afternoon, in which all the planets of our solar system were reunited in a supreme cosmic council precisely under the brilliant constellation of Aquarius, in order to initiate the new Age within the august thunders of thought.

Since that memorable date and under the regency of Uranus (the very venerable and very meritorious Lord of Aquarius), the Dionysian wave intensely vibrates within all of Nature.

It is important to emphasize within this present chapter the transcendental news that such a cited planet has been, is, and always shall be the brilliant star that intelligently rules and governs the endocrine sexual glands.

Now you will be able to comprehend for yourselves the intrinsic motive that the intensive Dionysian vibration originates in these moments.

Nonetheless, the concrete fact that the terrestrials in their overwhelming majority were not at the same level of the circumstances is evident, clear, and manifest. Earthlings were not capable of positively polarizing themselves with such a cosmic wave...

Therefore, to define the two aspects, positive and negative, of this cosmic vibration is relevant, urgent, and indispensable.

Negative Dionysian Pole: sexual degeneration; infrasexuality of many types; homosexuality, lesbianism; demonic pleasures within the infernal worlds by means of drugs, mushrooms, alcohol, etc., infernal music such as the “music” of these modern days, etc.

To comprehend in depth the intimate processes of these two poles of the Dionysian wave is something very urgent...

As a living example of these pair of diametrically opposite poles that correspond to the mentioned undulation, it is now opportune to cite here as a mode of illustration two contemporary revolutionary movements.

Plainly speaking, I want to clearly and delicately refer to the universal, international, Christian, Gnostic movements, and also to the obverse of the Dionysian coin known with the ill-famed or infamous name of the hippie movement and subsequent cultures.

Unquestionably, the two mentioned psychological antipodes constitute, “per se,” a living, manifested demonstration of these pair of opposite poles of the tremendous Dionysian vibration.

When judiciously arriving at this part of the present chapter, the necessity of a didactic confrontation is unavoidable.

Dionysian inebriation, ecstasy, Samadhi, is obviously indispensable when one is trying to experience that which is the Truth, the Reality. Such exaltation is one hundred percent possible by means of the technique of meditation.

Psychedelia is different. This term must be translated as this: psyche = “ soul ”; delia = “drug.”

Specifically, we will state: psychedelia is the antithesis of meditation. The inferno of drugs is within the interior of the planetary organism on which we live, under the very epidermis of the terrestrial crust.

Hallucinatory mushrooms, L.S.D., pills, marijuana, etc., evidently intensify the vibratory capacity of the subjective powers, but it is clear that they could never originate the awakening of the consciousness.

Psychedelic drugs fundamentally alter the sexual genes and this is already scientifically demonstrated. The birth of monstrous children is evidence of the sequence of such negative, genetic mutations.

Meditation and psychedelia are incompatible, opposite, and antagonistic. They can never be mixed.

Unquestionably, these two factors of the Dionysian inebriation refer to and indicate psychological rebellion.

Gnostics and hippies were annoyed with the vain intellectualism of Mammon. They were bored with so many theories. They arrived at the conclusion that the mind, as an instrument of investigation, is abundantly miserable...

Zen? Jnana Yoga? These are superlative. Faculties of cognition that are infinitely superior to the mind exist in a latent state within us. We can experience that which is the Reality, that which is not of time, in a direct way, by means of these faculties.

Unfortunately, the hippie movement preferred the inferno of drugs. Indubitably, they defined themselves perversely.

We, the Gnostics, plainly disappointed with the stubborn intellectualism of Mammon, drink the wine of meditation from the cup of perfect concentration.

Radical and in depth psychological changes are urgent when we are disappointed with the scoundrels of the mind.

To return to the original point of departure is what is wise. Only thus is a radical transformation possible.

It is written in the sacred scriptures with words of fire that sex is a stumbling stone and a rock of offense...

The evidence stands out; we are not the offspring of any theory, school, or sect.

In the crude root of our existence, we only find the coitus of a man and a woman...

We were born nude; somebody cut our umbilical cord; we cried, and then we searched for the maternal breast...

Clothing? Schools? Theories? Erudition? Money, etc.? All of these came later on, as an addition.

Beliefs of all types exist everywhere. However, the unique force that can transform us in an integral and unitotal way is the force that placed us on the carpet of existence. I am referring to the creative energy of the first instant, to the sexual potency.

To know how to wisely copulate is indispensable when a definitive psychological change is sincerely longed for.

The hippies forebode all of this when they revolted against Mammon, but they erred in their way. They did not know how to synchronize themselves with the positive pole of Dionysus.

We, the Gnostics, are different; we know how to enjoy. To transmute and sublimate the libido is enjoyable for us. This is not a crime.

The hippie movement and subsequent cultures resolutely march on the devolving, descending path of infrasexuality.

By purchasing a print edition of "Three Mountains", you get a high quality, permanent source of profound knowledge, you help us print more books, keep this website online, and allow us to give free books to prisoners, churches, libraries, and more.
Pick a Bookseller
Share This Page: