Mussolini stated, “Peace is an olive branch on the sharp edge of eleven million bayonets.”

The truth is not found in conceptual dualism. If we want to find the truth, we must go beyond the polarity of the mind; we need to reach the great synthesis.

"Peace" and "war" are one and the same mental form, with positive and negative poles.

It is an absurdity to call "peace" an epoch of preparation for war, yet unfortunately, this is how people who lack conceptual synthetism think. 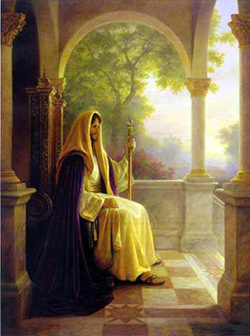 It is impossible to possess this type of atomic substance within our psyche as long as the psychological “I” continues to exist inside of us.

This is because all the factors that produce war, namely: cruelty, egotism, greed, ambition, hatred, astuteness, etc., exist within our psychological “I.”

All of those destructive factors that we carry inside are exhibited in the spectacular tragedy of war.

During the times of Cold War (that sooner or later becomes Hot) anyone who wants to become famous transforms himself into a paladin for "peace." This is a new way of becoming famous.

Notwithstanding, peace is not a matter of propaganda, nor of paladins with Nobel Prizes. Peace is an atomic substance that none of us can possess as long as the factors that produce war continue to exist within our psyche.

This is how wars, fights between monopolies, destructive covetousness, passion for conquest, etc., come to be.

The Law of the Reciprocal Nourishment of every existing thing exists in the world. The purpose of our lives is to supply maintenance to something big or small in the world. This law was known by ancient sages as the process of the Cosmic Common Trogoautoegocrat.

Wars exist due to fact that we do not know how to intelligently manipulate this great Law of the Reciprocal Nourishment of every existing thing.

Indeed, it is impossible to handle this great law as long as we continue to have within our psyche all of those psychological factors that produce war.

Nature has given us life, yet we have to pay Mother Nature a very high price for it. We nourish ourselves with Nature, yet Nature nourishes Herself with us.

Ancient Asian sages discovered within the psyche of every individual two sacred substances which they denominated Abrustdonis and Helkdonis.

The ancient sages stated that by intelligently transmuting these two metaphysical substances the sacred vivifying substance named Askokin is liberated.

Askokin is the substance with which this Great Nature is nourished. So, Mother Nature gives us life, yet She collects a very high price for it. She demands Askokin in exchange, yet if we do not voluntarily give this Askokin to her, then She snatches it by force, by means of great wars.

Nevertheless, if within every one of us the destructive factors that produce war did not exist, then Mother Nature would not need to utilize such a destructive system in order to snatch Her sacred nourishment through it.

By dissolving the psychological “I,” a permanent center of illuminated consciousness is established within us, and then, we liberate the sacred Askokin by means of upright thought, upright feeling and upright action.

Unfortunately, modern politicians do not accept these concepts from the ancient sages and the scientific ignoramuses from this epoch of wiseacres are like the donkey that believes in the grass only because it can see it.

The UN and the antiquated Geneva Convention have become failures related with the well-known problem of peace.

The UN, the organization for peace, wages wars and bombs defenseless cities, as was demonstrated in the African Congo. It is frightfully ludicrous to make wars in the name of peace.

Some few centuries ago, a type of UN or Geneva Convention was founded based on very good intentions in the Asian city of Mousolopolis.

The phrase of that society was: "The Earth is equally free for everyone."

That society was formed by an assembly of illuminated sages; all of them formed a council of venerable elders.

However, that society was dissolved when a certain philosopher exposed the problem of the Law of the Reciprocal Nourishment of every existing thing.

It was at that time when, before dissolving that august society, the system of animal sacrifices was established, in order to liberate the so-essential sacred Askokin for Nature.

That system succeeded; thus, their wars ceased, and Asia enjoyed much peace for a long period of time.

Later on, a Mohammedan Dervish named Assadulla Ibrahim Ogly, filled with love towards animals, pronounced himself against these sacrifices in all of Asia. It was then that the First World War exploded.

So, when Nature was deprived of the Askokin of animals, She then turned to War in order to snatch from us her nourishment.

We, Gnostics, are not in favor of animal sacrifices. But we are sure that only by means of the dissolution of our psychological “I” (our psychological animals) can liberate the sacred Askokin that Nature needs for Her nourishment.

By purchasing a print edition of "Social Transformation of Humanity", you get a high quality, permanent source of profound knowledge, you help us print more books, keep this website online, and allow us to give free books to prisoners, churches, libraries, and more.
Pick a Bookseller
Share This Page: