The Dream of the Consciousness

The four Gospels insist on the necessity of awakening, but disgracefully, people suppose that they have already awakened.

What is even worse is that certain types of individuals exist everywhere, who by the way, are certainly very psychic, yet they not only sleep, but more over, they dream that they are awake.

These type of people call themselves (so to speak) “seers.” They become very dangerous because they project their dreams, hallucinations, and madness upon others.  Precisely, they are the ones who accuse others of crimes they did not commit, and this is how they destroy homes.

It becomes obvious to comprehend that we are not speaking against the legitimate clairvoyants.  We are only referring to the hallucinating ones, to those sincerely mistaken ones who dream that they are awake.

Truly, with profound pain we have found that the cause of esoteric failure is the sleeping consciousness.

Really, many sincere, devout Gnostics who are lovers of the truth fail due to the lamentable state of their sleeping consciousness.

In ancient times, the Great Arcanum, the Maithuna, Sex Yoga, was only taught to those neophytes who had awakened their consciousness.   The Hierophants knew very well that the sleeping disciples would sooner or later abandon the work in the Ninth Sphere.

What is worse is that these failing ones cheat themselves by thinking the best of themselves. Almost always, they fall as harlots into the arms of some new little school that will grant unto them some kind of consolation.  Afterwards, they pronounce phrases like these, “I do not follow the Gnostic teachings, because they demand a couple.  This is a matter for oneself, since the liberation, the Great Work, is a matter which has to be searched for alone.”

Naturally, the only cause of these words of self-consolation and self-consideration is their own self-justification.

If these poor people had their consciousness awake, then they could see their error, they would comprehend that they did not beget themselves alone, that they have a father and a mother, and that there was a coitus that gave them life.

If these poor people had their consciousness awake, then they could verify for themselves that as above, so below, and vice versa.  They would directly experiment with their crude reality, they would be perfectly aware of the lamentable state in which they are.  Thus, they would comprehend the necessity of the Maithuna in order to build their Solar Bodies, the Wedding Garment for their souls .  This is how they would achieve the Second Birth, which the great Kabir Jesus spoke about to the Rabbi Nicodemus.

But such “wisdom taunting ones” are asleep, and truly, they are not capable of verifying for themselves that they are dressed with Protoplasmic bodies, with Lunar rags, that they are wretched and miserable.

The dreaming ones, the sleepy ones who suppose that they are awake, not only harm themselves, but moreover, they cause grave harm to their fellowmen.

Truly, I believe that the sincerely mistaken one, the sleepy one who dreams of being awake, the mythomaniac who believes himself to be super-transcended, the hallucinating one who qualifies himself as being illuminated, is used to doing very much harm to himself and to humanity. He does more harm than that inflicted by the one who never in his life entered into our studies.

We are talking in a very blunt language.  However, you can be sure, beloved reader, that when many sleeping and hallucinated ones read these lines, instead of stopping for awhile in order to reflect, correct, and rectify themselves, they will only search for a way of incorporating my words into themselves with the evident purpose of supporting their madness.

To the disgrace of this poor human ant-hive, people carry within themselves an awful secretary, which always wrongly interprets the Gnostic teachings. We are referring to the pluralized “I,” the “myself.”

The most comical aspect of Mephistopheles (the ego) is the way in which he disguises himself as a “saint.”  It is clear that the ego is pleased when it is placed upon altars and is worshipped.

It becomes pathetic and evident to comprehend in depth that while the consciousness continues to be bottled up within the pluralized “I,” not only will we sleep, but even worse, the consciousness will sometimes have the bad taste of dreaming of being awakened.

The worst genre of madness is the result of the combination of mythomania with hallucination.

The mythomaniac type of person is the one who boasts of being a God, who feels himself to be super-transcended, who wishes to be worshipped by all of the world.

When studying this chapter, these type of persons will accommodate my words to others, since they will think that they have already dissolved the “I” in themselves, even though they might have it more robust than a gorilla.

You must be very sure that when a sleeping mythomaniac works in the forge of the Cyclops, very soon they will abandon this work, and will say: “I already achieved the Second Birth. I am a liberated one. I have renounced Nirvana for the love of humanity. I am a God.” 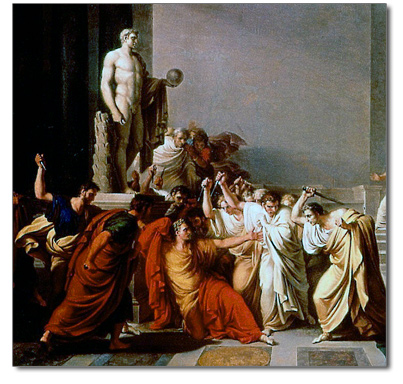 The Betrayal of Caesar

We have seen many ugly things within our beloved Gnostic Movement.  It is dreadful to see the mythomaniacs, the sleepy, hallucinated ones prophesying madness, slandering their neighbors, qualifying others as black magicians, etc.  Certainly, this is dreadful.

Devils judging devils!  All of these “perfection boasters” do not want to be aware that in this painful world in which we live, it is sometimes almost impossible to find a Saint.

Every magician is more or less black.  In no way can one be white while the demon, the pluralized “I,” is inserted within the body.

The attitude of going everywhere saying that “such a fellow is a fallen one,” is certainly a joke of very bad taste, since in this world all the people are fallen.

The attitude of slandering neighbors and destroying families with false prophesies is proper of hallucinating ones, of people who dream of being awakened.

Truly, if someone wants to Self-awaken, then he has to have the resolution of dying from moment to moment.  Let him practice deep meditation; let him be liberated from his mind; let him practice the Runes, such as we have taught them in this book.

Constantly, many letters from many sleepy ones are mailed to me at this patriarchal headquarters of the Gnostic Movement, which say, “My wife, my friend, or such fellow, is very evolved, is a very old soul , etc.”

These poor, sleepy ones who talk like this, think that time and evolution can awaken them, can Self-realize them, can take them to the final liberation.  These people do not want to comprehend that evolution and its twin sister devolution are exclusively two mechanical laws of Nature that work in a harmonious and coordinated way, in the whole of creation. When one awakens the consciousness, then one comprehends the necessity of emancipating oneself from these two laws and of penetrating into the path of the revolution.

We want awakened people, firm and revolutionary.  In no way do we accept incoherent, vague, imprecise, insipid, and inodorous phrases, etc.

We must live alert and vigilant as the watchman in an epoch of war.  We want people who work with the three factors of the revolution of the consciousness.   We lament the cases of too many sincere, mistaken ones, sleepy ones who only work with one factor, which, disgracefully, is many times wrongly done.

We need to comprehend what we are poor, sleepy beasts, machines that are controlled by the ego.