The Mayas themselves represent the Atlantean culture. 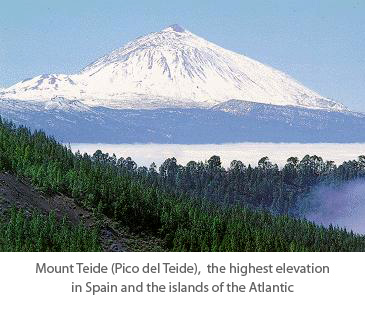 Atlantis was a vast continent that now lies submerged on the bottom of the ocean that carries its name. Atlas was the most ancient of its astrologers and was also its king. This is why the poetic mind of the children of Hellas represented him as a giant with the celestial machinery upheld upon his shoulders and powerful mind. His children, the Titans, attempted to climb and reach up to heaven, but God confounded them and one night the sea and thunder furiously roared. Europe, tremulously shaken, awakened by the rumble, did not see its brother-world anymore… Only Teide remained, so as to say onto humanity: “Here is where in a forgone time the famous Atlantis was found.”

Each Root Race has seven subraces and then dies. The fourth Atlantean Root Race had also its subraces.

The third and fourth subraces became tall with pride, saying, “We are the Kings; we are the Gods.”

They took wives fair to look at, wives from the “mindless,” the narrow-headed. They bred monsters, wicked demons, male and female, also khados with little minds.

They built temples of the human body; male and female they worshipped. Then the third eye (the intuitive eye or double-sight eye) acted no longer.

They built huge and beautiful cities; they cut their own images, in their size and likeness, and worshipped them.

Internal fires had destroyed the land of their fathers (Lemuria); water threatened the fourth race (Atlantis).

The first great waters came and swallowed the seven great islands. All the holy were saved, the unholy destroyed. Few men remained; some yellow, some brown and black, and some red, remained. Those moon-colored, the Tuatha, were gone forever.

Now we transcribe the translation of a Maya manuscript, part of the famous Le Plongeon collection and the Troano manuscripts, which can be seen at the British Museum.

In the year 6 KAN, in the 11th Mulac, in the month Zac, there occurred terrible earthquakes, which continued without interruption until the 13th Chuen. The country of ‘The Hills of Mud,’ the Atlantean land, was sacrificed; being twice upheaved it suddenly disappeared during the night, the basin being continually shaken by volcanic forces. Being confined, these caused the land to sink and rise several times and in various places. At last the surface gave away and ten countries were torn asunder and scattered; unable to stand the force of the convulsions, they sank with their sixty-four million inhabitants 8,000 years before this book was written.

In the archives of an ancient Buddhist temple of Lhasa (Tibet), a very ancient Chaldean inscription can still be read, one that was written 2,000 years before Christ. It states:

When the Baal star dropped to the right where there is nothing more than sky and sea (Atlantic Ocean), the seven cities trembled and worried with its gold towers and transparent temples as the leaves of trees do during a storm. A torrent of fire fell over the palace. Cries from dying persons and moans in the crowd filled the air. The people went to find a hiding place in the temples and in the castles. So the wise Mu, great priest of Ra-Mu, stood up and said: “Didn’t I predict all this to come?”

Men and women, dressed with their precious clothes, covered with precious stones, begged: “Mu, save us!”

Mu answered: “You will die, with your slaves and your treasures. From your ashes new people will come. If these people (referring to the present fifth Aryan Root Race) forget that they should not amass material things, not only for their own progress, but also for the generosity towards mankind, the same fate will surprise them.”

Tradition states that the flames and the fog choked the words of Mu. In a few months, the country and its inhabitants were smashed and swallowed in the abysms of the ocean.

What would critics say before these two stories, one from Oriental Tibet and the other from Mesoamerica? Both separately narrate the Atlantean catastrophe.

The history of the famous Universal Flood can be found within the traditions of all human races, and are all just recollections of the great Atlantean catastrophe.

All of the ancient populaces venerated and worshiped those Holy Gods who lived in Atlantis and who now inhabit the Empyrean.

America was geographically united with the Old World (Europe and Africa) through Atlantis. The ancient Indo-American civilizations have their root in the Atlantean continent.

A selected people were taken away moments before the Atlantean catastrophe. Some survivors came to Mesoamerica and others to the central plateau of Asia. They colonized Tibet, Persia, Egypt, etc. Mayan pyramids still exist in Egypt.

There exists full documentation that the great Master Jesus learned Maya in Tibet, thus he spoke the Mayan language. As a proof of this, we have the phrase pronounced by him on Golgotha. This was a Mayan phrase that the Jews did not understand, because they did not speak Mayan. When Jesus uttered: “Eli, Eli, lama sabachthani,” the Jews said, “This man calls for Elias… let us see whether Elias will come to save him.”

How would they have understood him? In rigorous Mayan language, Heli Lamah Zabac Tani signifies: “Now, I immerse within Him, before the dawning of his presence.”

It has been established that the science-religion learned by Jesus Christ in Egypt, India, and Tibet was Mayan. A profound Mayan occultism existed and Christ undoubtedly knew it; he elected his (Mayan) symbols as a base for his ideas of fertilizing love. It cannot be coincidence that he chose the Mayan cross, the Trinity, the twelve apostles, and many other symbols to become the foundation of the great religious and scientific significance of his preaching.

The Mayan-Atlanteans brought their science-religion and wisdom to Mesoamerica, Tibet, India, Persia, Egypt, etc. They were great civilizers.

Twelve Katuns have already passed and we are awaiting the thirteenth, year 2043. From here on, the final catastrophe of the Aryan Root Race, which perversely inhabit all the continents of the world, is inevitable. The thirteenth Katun is definitive. The Mayas are awaiting it.

He answered, “No, my son will not witness it.”

“Will your grandson witness it?”

“Yes, my grandson will witness it.”

So, Hercolubus will arrive with the Thirteenth Katun and the great universal bonfire that will burn everything that is alive will occur.

Later on, the revolution of the axis of the Earth will occur, provoking the total and absolute sinking of all the continents that exist. Thus, of this rotten Aryan Root Race that perversely dwelled in all the continents, not even its ashes will remain.

Only a small group of select people will be saved, to serve as a seed-plot for the future sixth great Root Race that will be named Koradi and that will inhabit what today is the polar cap.

This perverse Aryan Root Race is perfectly described in the Thirteenth Mayan Katun. It will perish by fire, and with the total revolution of the axis of the Earth the water will end consuming everything, washing everything. Thus, everything will remain on the bottom of the oceans.

Question: Venerable Master, is it true that the Mayas traveled throughout the solar system?

Samael Aun Weor: The Mayas, as Mayan-Atlanteans, traveled throughout the solar system. The rockets guided by the Mayan sages performed these portentous trips. Their cosmic ships were propelled with nuclear energy. The Mayas are great scientists and they continue to exist with their entire science in secrecy. However, I am not referring to those Mayas that publicly appear in Mesoamerica; instead I am talking about the Mayas who dwell in a parallel universe, within the fourth dimension of this planet, who preserve their magical cities, who continue with their same customs, with their same science, dedicated to their studies and calculations.

Mayan cities exist within the fourth dimension, within the fourth coordinate or fourth vertical, where the Mayas kept their great, ancient wisdom; these are marvelous temples of massive gold that they did not leave to the Spaniards. Obviously, modern scientists do not know anything about this, nor they will admit it, but what does it matter to science or to us?