The entire universe emanated from this masculine and feminine, dual principle.

According to the Nahuas, this god and goddess had four children, the four Tezcatlipocas:

The four colors of the four races that presently populate the world were born from this divine and invisible binary.

The creative forces of Ometecuhtli-Omecihuatl express themselves during the sexual coenobium; they descend into the organs of human procreation with the sole objective that a new being can manifest in the physical plane.

If man and woman are united only by desire, if they are impelled only by the animalism of spilling the semen, then the solar forces of the man and the lunar forces of the woman sink into the atomic abysses of the Earth, and both are converted into slaves of the abyss.

However, if love impels that union, and there is no fornication in the sexual caress, then the precious feathered quetzalli serpent awakens within them, and converted into Quetzalcoatl, ascends towards its place of origin. This is how the couple becomes divinized.

At the threshold of the sanctuary of the temple, the Masters present to the initiate a book, within which all the laws of the Divine Mother are written. Before that book many withdraw, filled with terror, when knowing that they have to annihilate the personality.

Few are those who pass the ordeal of the threshold of the sanctuary. Those who do pass it receive a heavy ring of fine gold, a symbol of power.

The initiate must die in order to be, but previously he has to return into the bosom of the Divine Mother. He has to practice sexual magic with his chaste spouse so that he can be born spiritually.

Whosoever does not know the laws of the Mother will never reach the Father. Coatlicue is none other than the blessed Mother Death.

As an alternative of the four hands shown by the Mexican Coatlicue, here, this stela points towards the four natural forces: fire, air, water, and earth. 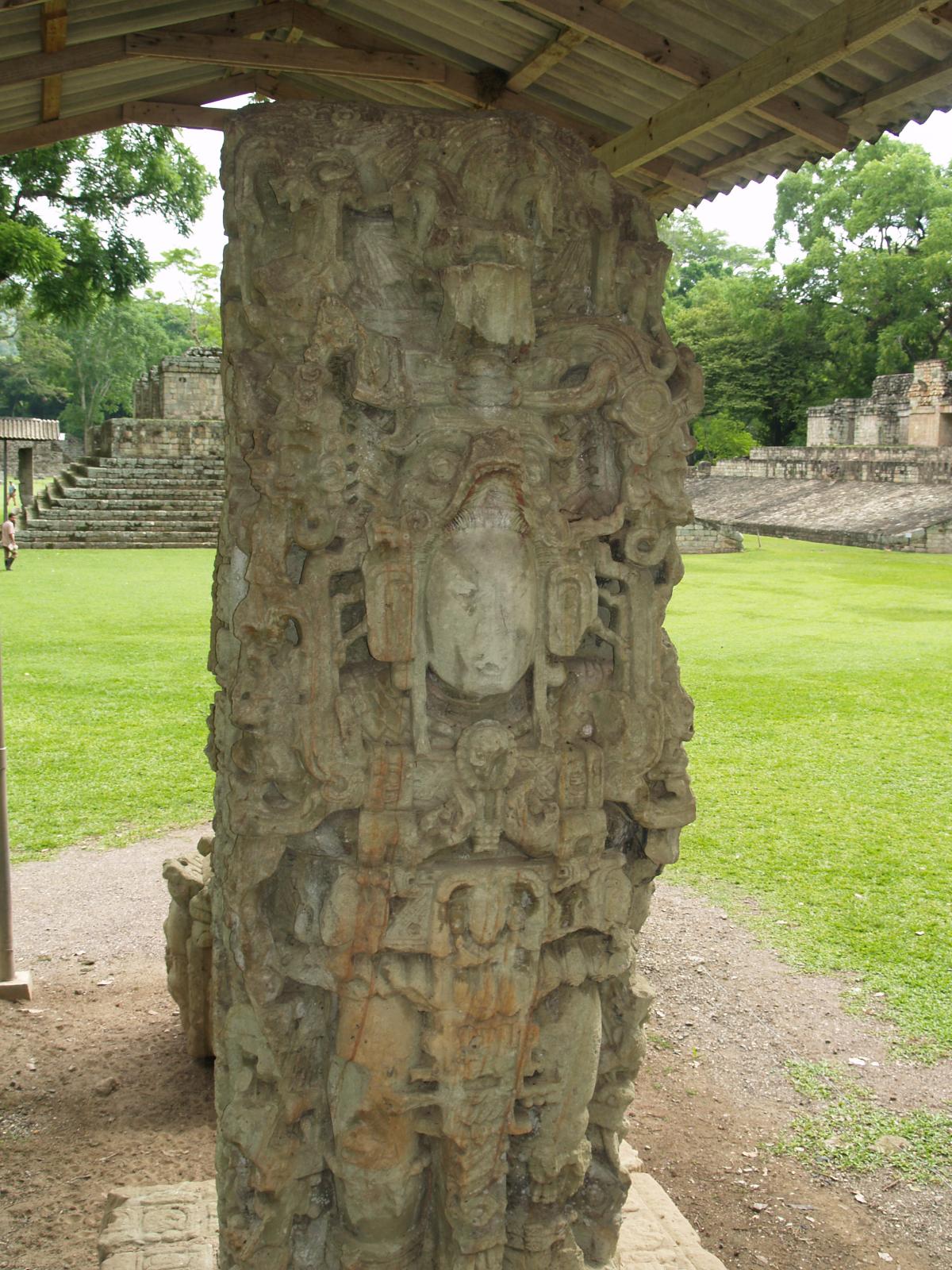 Its face has a very well done skull.

The miter has very noticeable adornments.

It does not lack a scepter in its center, indicating power.

Meditation is the bread of the wise. The wise meditates when in search for God, information, or power. There are five clues for meditation.

1. Comfortable posture. Concentrate on your physical body, and attentively examine it with the eyes of your soul . Prove that you are not that marvelous body, and discard it from your mind by saying, "I am not my physical body."

Thereafter, concentrate on your ethereal body; identify it, and after having attentively observed its luminosity (which, protruding from the physical body, forms a multicolored aura), discard it also from your mind by saying, "I am not the ethereal body."

Immerse more within yourself, and concentrate first on your astral body, and thereafter in your mental body.

These two bodies, astral and mental, are the two columns Jachin and Boaz of the Masonic temples, and their fundamental base is the cubic stone of Yesod, the ethereal body.

Concentrate on these two bodies, and after proving that you are neither of the two, but that they are two more instruments of expression, discard them from your mind by saying: "I am neither my astral body nor my mental body."

Discard from yourself your four bodies of sin, and pass between Jachin and Boaz, the two columns—white and black—of the temple that is your living body. Upon these two columns is written with characters of fire the password INRI. Disarrange it into two syllables, and vocalize them one after the other as follows:

Subsequently, without your four material vehicles, walk off and wander throughout the world of the mist of fire.

Return into the body to keep working, and concentrate anew in the black column of your living temple. This is the astral body. Now try to listen the sharp chirp of the cricket that is the essence of the lost word, INRI, Thus, without ceasing to listen to the sound that now emerges from within the cells of your brain, concentrate on the white column, your mental body.

Thus, a silent and sweet voice will answer, "You are me, the Innermost. I am the reflection of the Self-Christ. You and I are One."

When reaching this state of consciousness, pronounce mentally the mantra PANDER as follows:

This mantra will help you to become identified with your internal Christ.

Through this daily introversion, you will achieve the awakening of your consciousness to such a degree that during sleep you will act within your astral body with the same naturalness and lucidity as when you are within your physical body. Then (due to your sincerity and devotion) during the ecstasy you will be allowed to visit the nuclei upon which the universe is based (which allegorically look like holes) in order to contemplate the divine majesty of the Absolute.