Description of Stela 1: An Adept 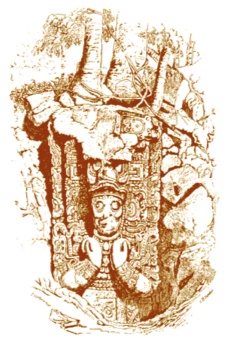 The countenance is grave, with a resemblance of a beard.

The hands indicate the ascent of forces.

The belt is very well adorned on the part of Yesod and Hod. A face is shown on the part of the sexual organs; this represents the third force or Holy Spirit. From the kabbalistic point of view, we know that the two arms indicate Chesed and Geburah, Love and Law.

The scepter, although very much damaged, is always at the center. It indicates the work in the ninth sphere.

The Logos expresses as Verb, as sound. There is a golden language that the human being should speak.

Before the human being departed, exiled from the Jinn paradises, they only uttered the verb of gold, the great universal language, which was the perfect grammaticism.

When wanting to visit the garden of delights, the great Egyptian hierophants submerged into profound meditation while holding in their right hand a nut known by the name of "Deer's eye."

This mantra becomes a true invocation. Under this mantra' s influence, the elemental of that nut assists with resisting. This elemental has the power of placing the physical body in a Jinn state—meaning, to submerge it in the fourth vertical.

When the hierophant felt that his body started to inflate or to be swallow from the feet up to the head, then he comprehended that his body had acquired the Jinn state. Thus he rose from his bed, filled with faith, and submerged into the garden of delights, he transported himself to any place on the Earth through the fourth dimension with the elemental of that nut named "Deer's eye."

There is a great master of the Jinn Science named Oguara. He invariably responds to the call of those who invoke him, and he helps them to submerge their physical bodies within the fourth dimension.