We can assert that Tantra is the essence of Yoga. There exist three types of Tantra: white, black and grey. Indeed, White Tantra is unique and worthwhile, because neither the orgasm nor the ejaculation of semen exist in it.

White Tantra awakens the Kundalini , in other words, the Fire of the Holy Spirit. That fire fortifies the soul ; it strengthens it and fills it with terribly divine igneous powers.

Sex Yoga states, “Poison must be transformed into medicine.” They understand by poison the lure of women and of spirituous beverages. In alchemical terms, we would say that it is necessary to transform lead into gold. 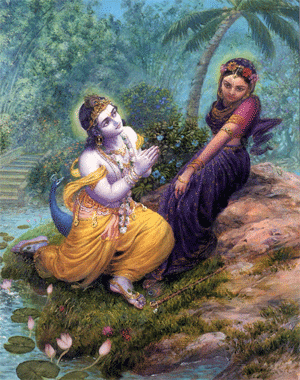 Brahmins consider the sexual union as equivalent to a divine sacrifice, and the feminine organs as the fire where the sacrifice is offered. The Brahmin woman says the following in one of the sacred texts:

If thou wilt make use of me at the sacrifice, then whatever blessing thou shalt invoke through me, shall be granted to thee! - Satapatha Brahmana

The Tantric Yogis and Yoginis pass through a long and difficult preparation before entering in to the field of Sex Yoga. This entire preparation requires Concentration, Meditation, Bandhas, Mudras, Pratyahara, Pranayamas, etc. One text indicates that the Yogi has to sleep for three months with the Yogini to his right and another three months to his left, without having sexual intercourse with her. The sexual intercourse without ejaculation is performed only after the two periods of three months. This act is named or called Maithuna. Nirvana is achieved with Maithuna. Samadhi (ecstasy) is attained with Maithuna. The Kundalini awakens and develops totally with Maithuna. Yogi and Yogini begin the dance of Shiva and Shakti (the eternal feminine and her spouse), thus they happily dance before the Tantric Sexual Act.

Thus, after the sacred dance the Yogi and Yogini couple sit to meditate as the Mayan Initiates do, back against back, the two dorsal spines making contact in order to achieve perfect mental and emotional breathing dominion.

They sit in the oriental style on the ground, with their legs crossed, as the Buddha is represented. The practice of Maithuna is performed only after this. Amongst the Yogis, all of this is performed under the guidance of a Guru. The Guru performs great, powerful magnetic passes on the coccygeal magnetic center of both Yogi and Yogini in order to help them to awaken their Kundalini .

A text of Yoga advices the Yogis to hold their respiration if they are in the danger of falling into orgasm. The text states,

If the disciple holds the respiration, his semen will not be spilled, even when he is embraced by the most tender and attractive of women.

Many magical positions exist in the east for the performance of the sexual act called Maithuna.

Women Yoginis must marvelously contract their vaginal muscles; this is how they avoid the orgasm and the ejaculation of their feminine sexual liquor. This is how their Kundalini awakens.

Tantric texts state that even when the semen is at the breaking point of being ejaculated, the Yogi must retain it at any cost, in other words, the semen must not be spilled.

The Yogi enters into ecstasy during the sexual act. Nirvana is attained with this type of sexual ecstasy. This is “to ride on the tiger;” this is how the Yogis consider this sexual act named Maithuna. 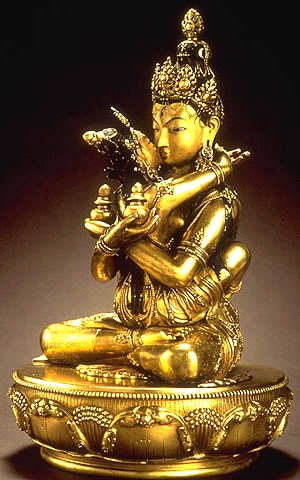 The sexual positions of Maithuna are numerous and they choose the one they wish. All of these sexual positions are found illustrated in the Kama Kalpa, a book of Sex Yoga. In one of them, the Yogi performs the Maithuna seated on the ground with his legs crossed in the oriental style; the Yogini sits on his legs and absorbs the phallus, thereafter she crosses her legs behind the Yogi’s lower back in such a way that the Yogi is enveloped by her legs.

Sometimes the inverted embrace is utilized, within which, for very sacred and symbolic reasons, the Yogini executes the active part. The Yogi represents the apparently motionless spirit while she, the Yogini, represents nature in motion. Thus, in the supreme moment of the sexual act when the orgasm is approaching, the Yogini performs the more terrible and violent sexual contractions in order to avoid the spasm and the orgasmic ejaculation. The Yogis take advantage of this moment for the most frightful concentration and the most remarkable meditation. This is how they attain Illumination, Ecstasy, Samadhi.

Nevertheless, in the Western World, any matrimony can practice Maithuna without using these difficult positions from the east of the world. It is enough to pray to the Holy Spirit before the practice, asking for His assistance, and thereafter to perform the sexual act in the western style; the couple must withdraw before the orgasm. The semen must never be ejaculated in one’s life.

The foolish scientists of Black Magic believe that this practice is dangerous and that can bring congestion to the prostate, urethra and seminal vesicles. This concept of the foolish scientists is a solemn falsity. We, the Gnostics, practice this sexual act throughout our entire lives, and we have never suffered of problems with the prostate or the urethra or the seminal vesicles.

There is no doubt that matrimonies can reach supreme happiness with Maithuna.

Couples can pray and meditate back against back in the oriental style if they wish, thus begging, beseeching the Holy Spirit, to grant them the joy of receiving the Fire.

It is false to asseverate that Maithuna damages the prostate and produces prostatitis. All of us who practice Maithuna enjoy splendid health.

In the beginning, the Maithuna is sacrifice, yet after some time Maithuna is complete sexual satisfaction and supreme joy.

All of those theories that the foolish scientists render in order to combat Maithuna are absolutely false, and those who allow themselves to be cheated by the “reason without reason” of these tenebrous ones, will inevitably be transformed into inhabitants of the abyss.

Voluptuousness: to all hair-shirted despisers of the body, a sting and stake; and, cursed as "the world," by all the afterworldly: for it mocks and befools all erring, misinferring teachers.

Voluptuousness: to the rabble, the slow fire at which it is burnt; to all wormy wood, to all stinking rags, the prepared heat and stew furnace.

Voluptuousness: to free hearts, a thing innocent and free, the garden-happiness of the earth, all the future's thanks-overflow to the present.

Voluptuousness: only to the withered a sweet poison; to the lion-willed, however, the great cordial, and the reverently saved wine of wines.

Voluptuousness: the great symbolic happiness of a higher happiness and highest hope. For to many is marriage promised, and more than marriage,-

During the sexual act and after the sexual act, when the voluptuousness is still vibrating, we pass through the sacrificius intelectus. Indeed only the creative emotion can takes to the ecstasy.

Those who learn how to wisely enjoy the voluptuousness without spilling the semen are transformed into absolutely happy beings.

The Perfect Matrimony is the basis of the Path for the Social Christ. Unfortunately, in modern life, matrimony has transformed into a frivolity which is distant from wisdom. This is why marriages collapse; this is the cause of many divorces. It is necessary to study Gnosis, it is urgent to go back into the mystical celebrations of the mysteries of love. It is urgent to learn how to enjoy the delights of love. It is urgent to comprehend that with voluptuousness the Angel is born within our own selves. Only the Angels can enter into the kingdom.

White Tantra has the science in order to end divorce and to preserve the honeymoon throughout one’s entire life. The home is the foundation of a Christian society. White Tantra with its famous Maithuna is the clue of divine sexual happiness.

By purchasing a print edition of "Matrimony, Divorce and Tantra", you get a high quality, permanent source of profound knowledge, you help us print more books, keep this website online, and allow us to give free books to prisoners, churches, libraries, and more.
Pick a Bookseller
Share This Page: