1. Have you ever seen a ghost?

Samael Aun Weor: Some people believe in ghosts, others doubt, and finally there are others who make a derision of them. I do not need to believe, doubt, or laugh about them, since for me the existence of ghosts is a fact.

2. Have you confirmed the existence of ghosts? Have you seen them?

Samael Aun Weor: Friend, it is not irrelevant to narrate a very interesting case to you. She was still very young and her name was Angela; indeed, she was quite an extraordinary girlfriend, although today she is already dead. One day, while she was still alive, I decided to move away from her without any notice. I went towards the coasts of the Atlantic Ocean and accommodated myself in the house of an elderly lady, a noble woman who did not deny me her hospitality. I made my room within the living room of the house, whose door went directly to the street. My bed was a tropical canvas camp bed and since there were a lot of mosquitoes, I protected myself with a very fine and transparent net.

One night while laying on my bed and dozing, unexpectedly someone knocked rhythmically three times at my door. At the moment in which I sat up in order to rise and go towards the door, I felt a pair of hands penetrate through my fine and transparent net; ominously, the hands approached me and caressed my face. However this ominous experience did not finish there, since in addition to those hands, a human ghost appeared with the semblance of that girlfriend—who, frankly, did not attract me. The distressed phantom wept while telling me the following phrases: “Ungrateful, you moved away without saying farewell to me; how much I loved and adored you with all of my heart,” etc., and other things.

I wanted to speak, but everything was useless because my tongue was tied. Then mentally, I ordered to that ghost to withdraw immediately.

However, the phantom uttered new moans and new recriminations. Then the phantom said, “Okay, I am going away,” and slowly, slowly moved away. Then, when I saw that the apparition was leaving, a new thought, a special idea, arose within my mind. I said to myself, “This is the moment to find out what a ghost is, what it is made of, what of it is real.”

It is obvious that when I started thinking in this way, fear disappeared from me and my tongue was loosened; then I could speak. Thus, I command the ghost, “Do not go away, come back, I need to talk to you.”

The ghost then answered, “Okay I am coming. I will not leave then.” It is not irrelevant to state that such words were associated with actions, so that ghost came again towards me.

What I did first was to examine my own faculties in order to check if they were working correctly. Then I said to myself, “I am not drunk, nor I am hypnotized. I am not a victim of any hallucination, since my five senses are working correctly, thus I do not have reason to doubt.”

So, having verified the proper functioning of my five senses, I came then to examine the ghost as follows. “Give me your hand,” I said to the apparition. It is obvious that the phantom did not refuse my demands, thus she extended her right hand to me. I held the arm of that extraordinary figure that was in front of me and I noticed a normal rhythmical march as if it had a heart. I auscultated the liver, spleen, etc. thus, every organ in it functioned correctly. However, the quality of that matter seemed rather like a protoplasm, a gelatinous substance, similar—when touching it—to vinyl; I performed that examination under the light of a properly lit bulb; the examination lasted about half an hour.

Later, I dismissed the ghost by telling her, “Now you can leave. I am satisfied with the examination.” While uttering multiple recriminations, the ghost withdrew, crying bitterly.

Moments later, the owner of the house knocked at the door. She thought that I had just disrespected the hospitality of her house. She entered and said to me that she had given hospitality only to me, and that she was surprised that I was bringing women into the room.

“My apologies to you, dear lady,” was my answer, “but I have not brought any woman here, a ghost has visited me, and that is all.” (It is clear that I narrated the whole incident to her). The lady was convinced, since she shook terribly when perceiving a frightful cold in the midst of the room—in completely tropical weather—which confirmed to her the veracity of my narration.

I wrote down the day, date, and hour of the event, and later on when I encountered that girlfriend I narrated my experience to her. She told me that on that night and at that hour mentioned by me, she was sleeping and dreaming that she was in a coastal place talking to me within a room similar to a living room.

I said to myself, “It is obvious that this woman went to sleep thinking of me, and this is why her ghost visited me.”

The peculiar aspect of this is that several months later that woman died, and one night while I was resting in my bed, the phenomenon was repeated, but this time the ghost—full of tenderness and affection—intended to lie down next to me. Since this matter was becoming quite horrific, I had no alternative but to command the phantom in a very severe manner to leave me forever and to not ever bother me in life; thus, the ghost did it as commanded and it never returned again.

3. Your narration was very intriguing, sir; would you please narrate another similar case to us?

Samael Aun Weor: With pleasure, my friend. On a certain occasion a poor young woman arrived at the city. She was in a terrible economic situation. She was an honest girl and asked to work for me. Thus, I did not have any inconvenience in employing her as a maid in my house. She turned out to be a very diligent worker. Unfortunately, a few days after she started working in my house, a series of extraordinary psychic phenomena happened that not only disturbed my relatives, but also the people of my neighborhood.

Before her presence the dishware rose in the air and crashed against the floor into fragments. Likewise, the tables, the chairs, were dancing by themselves, and stones were falling within our home. It was not very pleasant for us that at the precise moments of eating at the table, stones, dirt, etc., etc. were falling into our food.

This young girl had on her right hand a mysterious ring with an inscription that said exactly the following: “A reminder of your friend Luzbel.”

What is most intriguing is that although that woman was in misfortune (economically speaking) she did not stop receiving coins from her mentioned friend, which she always spent in order to eat. That money came through the air and she simply gathered it.

The girl told us that her “friend” told her that he lived in the sea and that he wanted to take her to the bottom of the ocean.

Many times we performed conjurations in order to push away her invisible comrade, but he always returned with more force, and returned to his devious actions, and the people, as is natural, were always alarmed.

Some young men fell in love with her, but when they tried to approach the lady, stones rained on them. Thus, they fled terrified and horrified.

Later, this girl moved away from the neighborhoods of the city. What became of her? We do not know. However, what indeed we could verify is that “Luzbel”—her peculiar friend—was simply an elemental of the ocean. There is no doubt that she had much of an elemental nature; this is what her eyes, her glance, her body, her way of being, etc., showed to us. 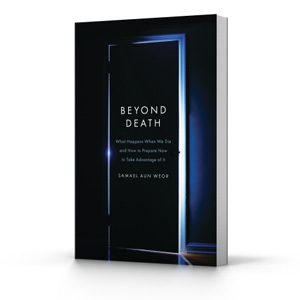 By purchasing a print edition of "Beyond Death", you get a high quality, permanent source of profound knowledge, you help us print more books, keep this website online, and allow us to give free books to prisoners, churches, libraries, and more.
Pick a Bookseller
Share This Page: