Learn from the greatest human beings. 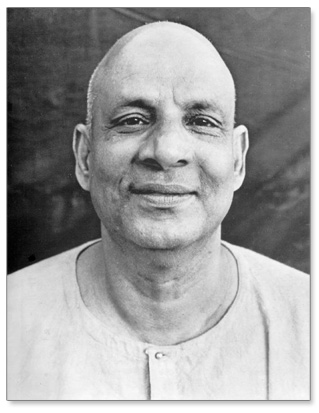 Swami Sivananda [pronounced Sheeva-nanda] was born in 1887 in the village of Pattamadai on the bank of the river Tamraparani in South India. He was named Kuppuswamy, and became a doctor who through his practice in Malaysia, actively served all levels of society.

Once a Sadhu gave him a book "Jiva Brahma Aikyam" by Sri Swami Satchidananda. It ignited the dormant spirituality in him. He began to study the books of Swami Rama Tirtha, Swami Vivekananda, Sankara, Imitation of Christ, the Bible, and literature of the Theosophical Society. He was very regular in his daily worship, prayer and Yoga Asanas.

He renounced worldly life, wandered across India, and took the vows of a renunciate (sanyasa) in Rishekesh, acquiring the spiritual name Swami Sivananda Saraswati. Swami Sivananda dressed to clothe himself, ate to live, and lived to serve humanity. A small dilapidated Kutir (hut), not resorted to by others and infested with scorpions, protected him from rain and sun. Living in that Kutir, he did intense Tapas (austerities), observed silence, and fasted. Often he fasted for days on end. He would keep a good stock of bread in his room, and for a week have this, together with Ganges water. He would stand up to the hips in the ice-cold Ganges in winter mornings and commence his mantra practice, coming out only when the sun appeared. He would spend more than twelve hours in daily meditation.

With all his intense Tapas, Swamiji did not neglect service of the sick. He visited the huts of the Sadhus with medicines, served them, and shampooed their legs. He begged food on their behalf and fed them with his own hands when they fell sick. He brought water from the Ganges and washed their Kutirs. He attended upon cholera and smallpox cases. If necessary, he kept vigil through the night by the side of the bed of the ailing Sadhu. He carried sick persons on his back to the hospital. With some money from his insurance policy that had matured, Swamiji started a charitable dispensary at Lakshmanjula in 1927.

Swamiji practiced all the various Yogas and studied the scriptures. After years of intense and unbroken practice, he enjoyed the bliss of Nirvikalpa Samadhi. Swami Sivananda radiated his divine and lofty message of service, meditation and God-realization to all parts of the world through his books, running to more than three hundred, through periodicals and letters. His devoted disciples are drawn from all religions, cults and creeds in the world. He founded several organizations, all dedicated to the service of humanity. Swami Sivananda's Yoga, which he has significantly called the 'Yoga of Synthesis', effects a harmonious development of the 'hand', 'head' and 'heart' through the practice of Karma Yoga, Jnana Yoga and Bhakti Yoga.

On the 14th of July 1963, the Great Soul Swami Sivananda entered Mahasamadhi (departure of a Self-realized saint from his mortal coil) in his Kutir on the bank of Ganga, in Shivanandanagar.

He founded the Divine Life Society at Rishikesh in 1936, the Sivananda Ayurvedic Pharmacy in 1945, the Yoga Vedanta Forest Academy in 1948 and the Sivananda Eye Hospital in 1957. During his lifetime Swami Sivananda guided thousands of disciples and aspirants all over the world and authored over 200 books.