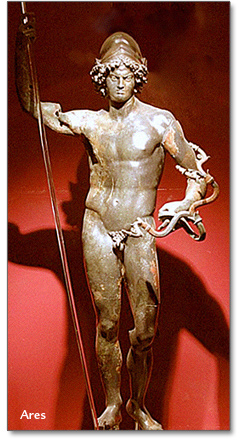 (Greek) One of the twelve gods of Olympus. Ares was associated with the Roman god Mars and the planet Mars. Ares represented the divine forces related to manliness, courage, ferocity in battle, and when placated, the possibility of peace.

"Ares, exceeding in strength, chariot-rider, golden-helmed, doughty in heart, shield-bearer, Saviour of cities, harnessed in bronze, strong of arm, unwearying, mighty with the spear, O defender of Olympos, father of warlike Nike (Victory), ally of Themis, stern governor of the rebellious, leader of the righteous men, sceptred King of manliness, who whirl your fiery sphere [the star Mars] among the planets in their sevenfold courses through the aither wherein your blazing steeds ever bear you above the third firmament of heaven; hear me, helper of men, giver of dauntless youth! Shed down a kindly ray from above upon my life, and strength of war, that I may be able to drive away bitter cowardice from my head and crush down the deceitful impulses of my soul . Restrain also the keen fury of my heart which provokes me to tread the ways of blood-curdling strife. Rather, O blessed one, give you me boldness to abide within the harmless laws of peace, avoiding strife and hatred and the violent fiends of death." - Homeric Hymn 8 to Ares; C7th to 4th B.C.