Jesus was not the first one who incarnated the Truth, and neither shall he be the last.

The Hierophant Jesus has the same attributes of Zeus, Jupiter, Apollo, Krishna, Quetzalcoatl, and like them, also had his immaculate conception in the womb of a virgin.

Mythology says that Jesus was born on the 25th of December (the birth date of the God Mithra) in the town of Bethlehem, a town that did not exist in those times.

The name Bethlehem is derived from the word Bel or Belen, the Sun God of the Babylonians and Germans. The term Bethlehem indicates the Cosmic Christ, the Sun God, the Solar Logos.

Mary is fecundated by the Holy Spirit. The latter, in the form of a dove, fecundates Mary's womb. The dove is a phallic symbol; let us remember Peristera, a nymph in the court of Venus, transformed by love into a dove.

The womb of the Virgin Mother is fecundated only with Sexual Magic, so that the Child God may be born in the manger of the world.

In the life of Jesus, Iesus, Zeus, Jupiter, Nazarenus, surges a passionate woman named Mary Magdalene, and she rapidly occupies the place of Salambo, Matra, Ishtar, Astarte, Aphrodite, and Venus.

There are no differences in hierarchy in the Cosmic Christ. We are all ONE in the world of the Truth. However, it is good to clarify that the Buddha Jesus is the most exalted Master of the universe. Buddha is the Realized Spirit in every Perfect Man.

Christ is the Truth.

The birth of Jesus the Christ—and his life, passion, death, and resurrection—should be lived by everyone who Christifies himself. 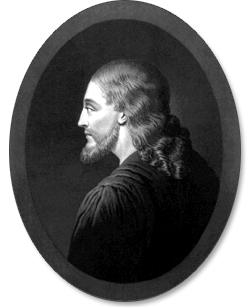 The only true Image of our Lord Jesus Christ

Taken from an emerald engraving ordered by Tiberius, Roman Emperor. It comes from the treasury of Constantinople and it was given to Pope Innocent Vlll by the Sultan of Turkey in payment for the rescue of his brother, held captive by the Christians. This picture was taken directly from the priceless emerald belonging to the Vatican Treasury.